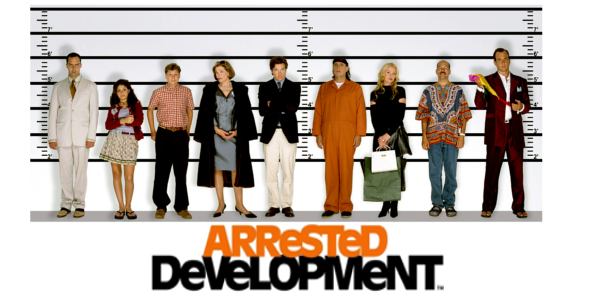 Here is a list of ten of my personal favourite Arrested Development episodes, including a brief description of each one. Choosing ten was incredibly difficult - this wildly funny sitcom has given us three seasons and fifty-three episodes to date - So I'm sure many will disagree with my outcome. If so, tell me in the comment box.

Michael is becoming increasingly dissatisfied with the families extravagant spending, especially that of his mother. Originally banning her from throwing a birthday party for herself, he eventually agrees on Lindsay's idea of a surprise party. But chaos develops when not even one family member bothers to turn up, resulting in an erratic Lucille crashing the car on the drive home and then framing an unconscious Michael, making out that he was the cause of the incident. Meanwhile, Lindsay is annoyed when she visits her father in prison. Anticipating animalistic howls from the inmates, they all remain subdued and silent. Adopting a more slutty attire, she keeps returning, but without attracting a second glance. Eventually she is told by George Sr. to stop coming as she is costing him a fortune - he's been paying the prisoners in gold Krugerrands to keep a gentlemanly conduct when his daughter comes to visit. Lindsay is touched by this rare expression of care from her father. This episode also features George Michael and Maeby sneaking into an R rated movie during which a trailer for a taboo French love story between two cousins is played, resulting in George Michael trying to obtain a fake ID to see the movie.
Contributor
Luke Simmons

Luke Simmons hasn't written a bio just yet, but if they had... it would appear here.

9 Movies With Seriously Insane Details Nobody Could Notice

Friends: Progressively Harder Joey Tribbiani - Which Question Will You Fail?

Friends Quiz: Who Did Joey Tribbiani Say It To?

Friends: The Absolute Hardest Monica Geller Quiz On The Internet

The Vampire Diaries Quiz: Bet You Can't Name All These Villains

Stranger Things Quiz: How Well Do You Remember The Very First Episode?

Can You 100% The Hardest WandaVision Quiz On The Internet?

How I Met Your Mother Quiz: You'll Never 100% This Recurring Characters Fill In The Gaps Quiz

Lucifer: You'll Never Get 100% On This Ella Lopez Quiz