5. It Does Science Right 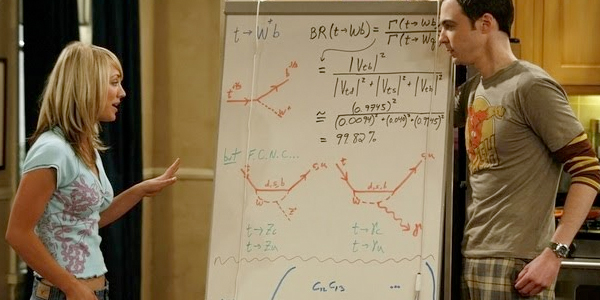 We could argue about whether those with a love of science could be considered nerds or geeks or if there's really much of a difference to those names at all. One thing that can't be argued, however, is the science behind the science on the show. Whether you're a fan of physics, neurobiology, or chemistry there's plenty of facts - and we do mean facts - for every science lover. David Saltzberg is a professor of physics and astronomy at the University of California, Los Angeles and also works with the show to make certain everything is factual. Dialogue, props, and equations are all provided by Saltzberg who helps the show maintain a sense of realism in the careers of the main characters. Mayim Bialik - who stars as Amy Farrah Fowler - has a real life PhD in neuroscience and translates her knowledge of the subject onto her character. Though it could be quite simple to fault a television show for making even the smallest of mistakes the Big Bang Theory gets everything right on the dot. The Big Bang Theory is full of interesting facts surrounding science and whether you hold a deep love for the subjects or not you'll find yourself intrigued. If you're interested in checking some of them out click here.
Contributor
WhatCulture
Contributor
Twitter

10 More Actors Who Hate Their Own Movie Performances

10 Movie Stars Who Gave Their Best Ever Performance On TV

10 Actors Who Were Recast After The Pilot Episode

10 Most Hated Doctor Who Characters

The Vampire Diaries Or Supernatural Quiz: Who Said It - A Salvatore Or A Winchester?

Friends Quiz: Was It My First Line Or Last Line?

10 Stupidest Decisions Made By Characters On The Walking Dead

Friends Quiz: Who Said It To Monica Geller?