Advertisement
It is no secret that in Doctor Who's formative years, the production teams at the time didn't envision the series to last 50 years. Whilst it is well documented that the treatment of episode tapes after transmission was less than favourable, some of the props have become relics with a history of their own. Even by the nature of modern television production, props and costumes aren't built to last and have a very short working life. However some things like a model Yeti, sold not long ago at auction, as featured in the recently discovered 'The Web of Fear' have got lucky. Here is a brief run down of some props and costumes that are fortunately still with us. 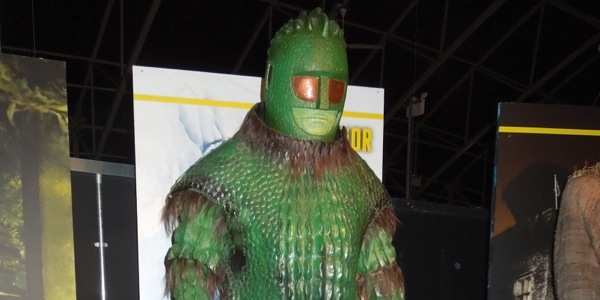 Details are sketchy on the Ice Warrior costumes as they were used in the late 60's and early 70's, the last screen use being a cannibalised chest piece being used as a Kaled mutant in 'Genesis of the Daleks' and nothing was seen or heard of them since. Furthermore, the original Ice Warrior costumes were redesigned and built between pre-recorded filming and studio video taping of 'The Ice Warriors', and another new set of costumes were built, further redesigned for their second outing, 'The Seeds of Death'. Successive appearances would be a mishmash of parts. Props and costumes had to be stored, maintained and catalogued. This was an expensive process, so if something was in less than great condition, or hadn't been used in a while, it would end up in a skip to save money. Their last appearance having been 1974, it was unlikely the Ice Warrior costumes would have been retained for the whole 26 year production run. Nevertheless, one was and it is one of the earliest examples of a surviving Doctor Who monster, never mind one of the earliest Ice Warriors. It is none other than the costume worn and tailored to 'Carry On...' guest star Bernard Bresslaw, who played Varga in 'The Ice Warriors' and was instrumental in developing the Ice Warriors hissing, whispering, speech pattern. It is unclear whether other Ice Warrior parts or complete costumes exist in private collections, but the Varga costume exists in its entirety, fully refurbished and is available to view at the 'Doctor Who Experience' in Cardiff.
Contributor
Jonathon Carley
Contributor
Twitter

My name is Jon, recently graduated media production student. Always on the look out for chances to do what I enjoy and make it count. Writing, filming, animating, editing, radio. My speciality seems to be Doctor Who, years of accumulated knowledge and passion appear to be paying off creatively this being one outlet channel. So thanks for sharing in that with me and offering your support by reading my articles.

Friends Quiz: Who Am I - Chandler, Joey Or Ross?

Friends Quiz: Bet You Can't Name All These Characters!

How I Met Your Mother Quiz: The IMPOSSIBLE Robin Scherbatsky Quiz

12 Bloodthirsty TV Episodes That Killed The Most Characters

The Office: That's What She Said Quiz!

Parks & Recreation: The Hardest Ron Swanson Quiz On The Internet

The Hardest Schitt’s Creek Quiz On The Internet