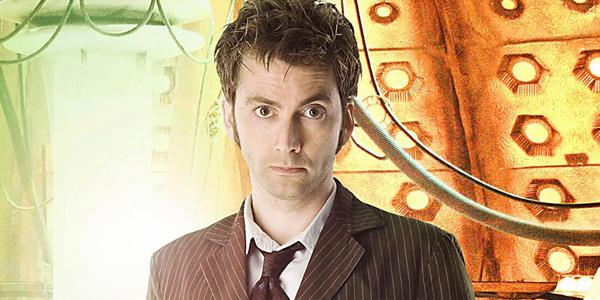 A bubble of excitement surrounds the 50th anniversary of Doctor Who, now little over three months away from broadcast. For some it's because of the conclusion of the mystery surrounding John Hurt, for others it's a chance to celebrate the show and its epic history spanning five decades. But for a lot of people (and fans) it's because of the return of the Tenth Incarnation of the Time Lord, played by David Tennant in a fantastic five-year spell which cemented the revival in the upper tiers of modern British popular culture. Considering that Tennant is returning, against the 'logic' of the show, many people have begun to re-watch and reconnect with the episodes, right up from his first appearance to his final tear. I myself have recently purchased a lot of 'Who', and watching back through the Tenth Doctor's era, realize just how good, well written, and bizarre this incarnation actually was, and why he has stuck in the memory and even dislodged the ever-loved Tom Baker, in some peoples' minds, as the best-ever presentation of the character. It seems a good moment, therefore, to wind the clock back and present what I perceive to be the best episodes of an era which is slowly disappearing into the Time Vortex. Allons-y! (and warning: spoilers!)
Contributor
Sam Orchard
Contributor
Twitter
Facebook

Me? I'm 17 years old, from Dawlish, Devon and studying (tirelessly) at Exeter College. I love pretty much anything, am a fan of numerous TV programmes and films, countless books and topics, from Sherlock to the Cold War, Doctor Who to Muse and my ambition is to become a journalist in any field which I have an interest in, and I hope to show my opinions (although varied) to the full.

Friends Quiz: Which Of Ross' Love Interests Said It?!

10 TV Moments IMPOSSIBLE To Watch Same Way After This

The Office Or Friends Quiz: Who Said It - Jim Halpert Or Mike Hannigan?

Harry Potter Or Buffy The Vampire Slayer Quiz: Who Said It – Professor Umbridge Or Principal Snyder?

Brooklyn Nine-Nine Quiz: Can You Match The Raymond Holt Scene To The Season?

Brooklyn Nine Nine Quiz: Who Am I - Rosa, Amy Or Gina?