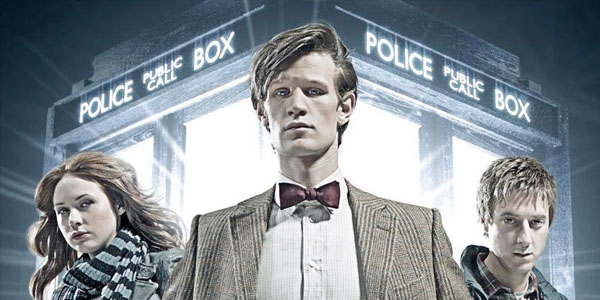 Reaction to a new series of Doctor Who is always an interesting phenomenon, in fact if you only gauged the shows popularity by referencing the internet youd be forgiven for thinking that its not very liked at all. Amidst the most recent criticisms, complaints like the last series was too complicated or that the current series is too childish (a criticism easy to identify with, I personally dont feel as intellectually challenged now the farting aliens and burping wheelie bins are gone), a very important point is lost, namely that everyones favourite mad man with a box has been, and still is, one of the most watched and beloved shows on the box. This is not to say that the show doesnt have highs and lows, nor to say that fan criticism isnt a perfectly legitimate form of expression but, simply put, there are always those ready to insist Doctor Who is dying, nothing but a pale imitation of its former self, and this view just isnt reflected in the continuously high viewing figures, with mega time shits, or in the consistently strong Audience Appreciation Index scores. After only five episodes Doctor Who maybe on a break again, the fans who waited now have until Christmas before the next instalment, but I think this series has been as strong as ever. (needless to say there will be, as River Song repeats ad nauseum, spoilers.) It began with Asylum of the Daleks, an epic, ambitious and well realised episode that gave Skaros finest a creepy new angle, as well as giving us a surprise introduction to Jenna-Louise Coleman as Oswin, an ill-fated junior entertainment manager, who put her own charming spin on Moffats familiar dialogue whilst providing an endearing level of vulnerability. Her inclusion was a genuinely pleasant shock although Im sure it lead to many missing a few important lines of exposition that Moffat likes to shoot out at high speed, as they turned to their loved ones gawping Is thatno it cant be, wait it is, its her! Dinosaurs on a Spaceship was a rip-roaring adventure with a great sense of fun, a surprisingly well developed internal consistency (especially given the common criticism that this episode was somehow sillier than usual) and showed that whilst the Doctor is a tormented lonely angel, sometimes it's fun just to see him as an eccentric, tweed sporting, bow-tie wearing alien. There was also a deliciously dark villain in Solomon, who provided some intense scenes between himself and the Doctor (and for all those insisting that the Doctor was acting out of character in letting him die, have you forgotten the Doctor who let the last human explode all over Platform One, who drowned the Racnoss children and who damned the Family of Blood to eternal fates worse than death? Even under Russell T. Davies, the man who never would sometimes did.)

The series got a little darker with A Town Called Mercy, a full blooded Western with a serious moral dilemma at its heart although it was not without spots of humour, Susan the gender confused horse being a particular highlight (I wonder why the Doctor took such a shine to the horse. Maybe it reminded him of Rose.) The Power of Three was a largely successful look at the interesting dynamic between the Doctor and the increasingly settled Ponds, an episode that constantly wanted to remind you just how much these characters love each other. It was let down only by a poor last few minutes; the Doctor waving his screwdriver around was hardly a fitting conclusion to an otherwise well written story (Plus, as many have pointed out, the Shakri looked like a Star Wars knock-off, a mishmass of Vader and Palpatine, and how much did that set look like the Jedi Council room? If they had thrown in a few wooden actors youd be forgiven for thinking you were watching a prequel.) However the climax of the series, The Angels take Manhattan was perhaps the best of the bunch and concluded with what this series has been building up to, the departure of the Ponds. Creepy, atmospheric and bringing back the Weeping Angels to make sure kids weren't going to be sleeping anytime soon, it was a fine exit for Amy and Rory. Particularly impressive was how Rorys tendency to die (God bless him but hes always been a bit of a liability; I'd imagine hed struggle to find a cheap life insurance policy) fueled his conviction thatd hed survive the suicide, showing how his knack for dying throughout his travels has made him a stronger person. Equally, Amys abrupt but heartbreaking exit might not have been the romantic tragedy of Roses departure, nor did it have the dark nihilistic edge of Donnas cruel fate, but it certainly ensured it wasnt only the angels who were weeping that night. Moffat, the man responsible for everybody lives, got to have his cake and eat it with Amy and Rory; they both lived and they both died. The Ponds shall certainly be missed. All this and were only five episodes into the series. Theres a great new companion to look forward to (only under Moffat could a new companion be already brilliant timey wimey), the emotional fallout of the Doctor losing his two best friends plus a host of different writers bringing their best efforts to the series. So for all those naysayers who insist the show is past its best, it really isnt, its still one of the strongest, most imaginative and most engaging shows on television. Even if the last few episodes havent been to your taste, who knows what the rest of series seven will bring as we enter into the 50th Anniversary year. Perhaps, as hinted at the end of series six, the time is coming to answer the question, the question that has been hidden in plan sight for fifty years (for us at least), Doctor Who? Ill certainly still be watching when its answered.

Want to write about Doctor Who and Steven Moffat? Get started below...
Contributor
Marc Crosby

Final year Philosophy and Theology student with a borderline unhealthy love for film and TV. Feel free to contact me at marc.crosby@sky.com

Which Movie Theory Do You Wish Was True?

12 Actors Who Hated Being On Star Trek

How I Met Your Mother Quiz: Bet You Can't Name All These Characters!