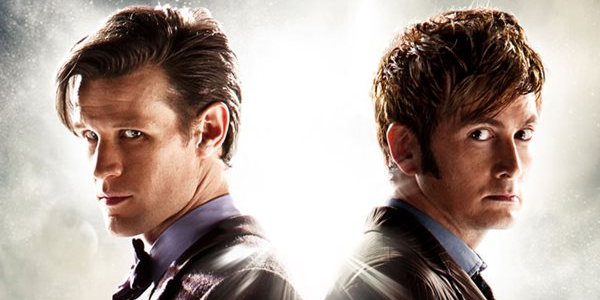 Last night, through some sort of connections with BBC Latin America, someone leaked "The Day of The Doctor" trailer for the whole world to see. Almost 24 hours in advance of its premiere on BBC One/BBC America, the BBC had no choice but to release their authentic (read: non-subtitled) version onto the Internet early this morning. You can watch it below; https://www.youtube.com/watch?feature=player_embedded&v=Mkq8pnvsnQg Among the highlights of the trailer: - Some footage 10 and 11 buddying up, which does not disappoint. - Three, count 'em, THREE different TARDIS consoles in action. - Rose Tyler with that familar "Possessed by the Time Vortex" look in her eyes. - John Hurt's Doctor interacting with Rose Tyler, as she tells him that "The Moment is coming". Now this might seem like typical cryptic gibberish, BUT there's one obvious plot thread that looks to be rearing its head once and for all... The Time War. For starters, if you look at John Hurt's wardrobe and compare it to the newer Paul McGann costume, you start to see similarities in the design. Could it be that The Doctor's eighth incarnation actually made it to old age? Second, "The Moment" has been mentioned before in Doctor Who history: by the Time Lord High Counsel in "The End Of Time". The line in question read as follows, "The Doctor has The Moment and he will use it". Seeing as the Time Lord High Counsel was time locked into the Time War's last days, this pretty much states that The Doctor used The Moment to end the Time War once and for all. So not only are we getting 10 and 11 in the same room together, we might get to see the 8th Doctor's final adventure for the first time.

Whatever the case, Whovians are more than ready for the 50th Anniversary special, which will be airing simultaneously on countless BBC affiliates, as well as a theatrical simulcast in limited theaters worldwide. Anyone interested in seeing the special in theaters, but unable to secure tickets to the simulcast, should look into Fathom Events' theatrical re-broadcast on Monday November 25th. Tickets can be found on the official Fathom Events website or through Fandango. If that's not enough excitement for American Whovians, then they should prepare for a week long binge of Doctor Who themed programs on BBC America from Monday November 18th through to The Day of The Doctor. (It's only fair, since the UK gets the awesome official convention and all.)
Want to write about Doctor Who, David Tennant and Matt Smith? Get started below...
Contributor
Mike Reyes
Contributor
Twitter

The Office: How Many Characters Do You Know?

The Office Quiz: How Well Do You Remember These Workplace Injuries?

The Big Bang Theory Or Friends Quiz: Who Sang It - Sheldon Or Phoebe?

How I Met Your Mother Quiz: Can You Match The Scene To The Season?

30 Greatest TV Sitcoms Of All Time