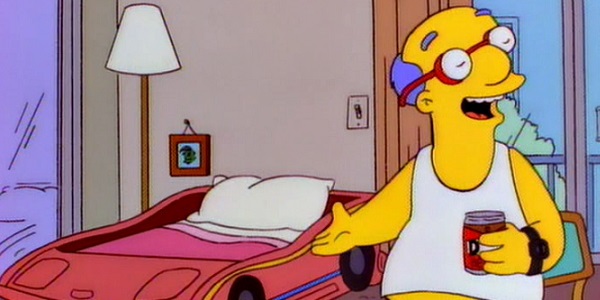 20th Century Fox40-something Kirk Van Houten is the middle management mid-life crisis nightmare. Everything falls apart for Milhouses weekend Dad when Luann demands a divorce from the pathetic figure in A Milhouse Divided at the Simpsons dinner party. Unsurprisingly Luann gets custardy of Milhouse and Kirk is forced to leave the family home and move into a pokey bachelors apartment where he sleeps in a pitiful racing car bed. While Kirks love life goes absolutely nowhere, he must look on as his ex-wife starts a relationship with the strapping Pyro  an American Gladiator who is the polar opposite of the doughy Kirk. Watching your former wife and the mother of your only child frolicking with a man who could literally tear you limb-from-limb must be a very sobering experience. The elder Van Houten becomes so desperate to win Luann back that he even attempts to cut off his own foot in Large Marge. He is eventually sacked from his managerial role in the Cracker factor and finds re-employment as the assistant to a flier distributor. It should come as no surprise that Kirks depressing post-divorce life drives him to alcoholism and even attempted suicide.
Contributor
Sam Heard
Contributor
Twitter
Facebook

10 TV Shows That Mock You For Paying Attention

5 Things We NEED From Christopher Eccleston's Doctor Who Return

Friends Quiz: Who Was It - Joey Or Monica?

Sons Of Anarchy Quiz: You'll Never Get 100% On This Jax Teller Quiz!

Agents Of SHIELD: 5 Things Fans Want From The Series Finale

How I Met Your Mother Quiz: Who Am I - Ted Or Marshall?

Which TV Show Did These Actors Cameo In? - Quiz