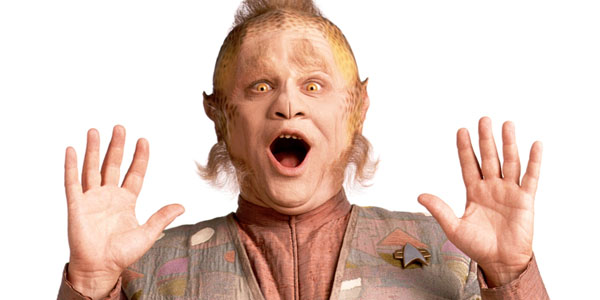 Okay, we all know about the "redshirts" in the original Star Trek, and major characters like Worf, Riker and the venerable Spock have come close to death, some even dying during the run of the later series, and on into the films. Hell, even Picard died, if we are to believe Q, and who wouldn't believe that fine, upstanding, honest, omnipotent entity? Space travel is dangerous, and we've seen the deaths of, among others, Tasha Yar, Jadzia Dax and of course Gul Ducat as the descendants of the original Trek have wound on through the intervening years. That's only natural, after all: no sci-fi series would be worth its salt if someone didn't die, and of course the added impact of having a major or longterm character snuff it can hardly be overestimated in terms of shock value and, of course, ratings. But I'm sure you'll agree with me that some people have, in many cases unaccountably and in a few almost unbelievably, dodged the attentions of the Grim Reaper with what can only be regarded as the highest possible luck quotient, because I can name you at least ten characters in the Star Trek franchise who could, and should, have come to a sticky end. And no, nobody is likely to be surprised at who gets the number one spot, but there are others who I believe were almost as deserving. To be fair, I'm not even going into Enterprise, because as far as I'm concerned the whole lot of them could have disappeared into some galactic anomaly and never been seen again, and the only sounds to greet that would be thunderous applause. Voyager? Well, yes Voyager was terrible but it was saved by some --- admittedly few --- decent storylines and of course two great characters, so we won't consign them all to that fate just yet.
Contributor
Deryck O'Byrne

Born and raised in Dublin Ireland, I worked for almost 30 years in the freight industry but took voluntary redundancy in 2009 to look after my sister, and discovered I had suddenly more free time on my hands. That's when I started contributing to online blogs such as Music Banter, and recently joined WhatCulture. A big sci-fi geek, I love Star Trek, Babylon 5, Farscape, Dr Who and many others as well as Red Dwarf, Buffy/Angel and so on. Love to write and express my views, and I always feel a but of humour never goes amiss. Big animal lover with three cats, and finally came into the 21st century by buying a HD TV! Yay!

The Walking Dead: 10 Ways The Rick Grimes Movie Can Save The Show New

10 Worst TV Spin-Offs Of All Time

Buffy The Vampire Slayer Quiz: Who Said It - Buffy Or Willow? New

How I Met Your Mother: 10 Worst Things Lily Ever Did

10 Reasons Why Data Was A Dangerous Threat To The Enterprise