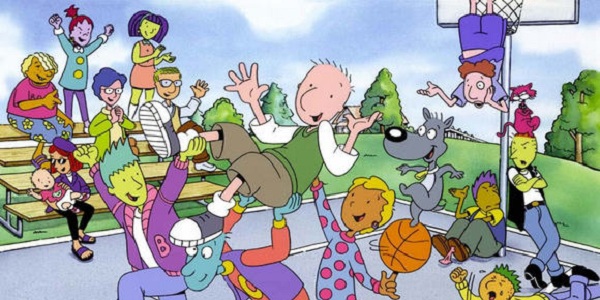 If you were a product of the 80's then you watched Doug on Nickelodeon. It was about an 11 year old kid who was just trying to survive and make it through his day to day life, and elementary school. Whether he was kickin' it with Skeeter or trying to figure out how to tell Patti Mayonaise he loved her, Doug was awesome. Even to this day he's still incredibly recognizable to us 80's babies.

49. Clarissa - Clarissa Explains It All

Now this one's for the ladies. Clarissa was about a teenage girl who was just trying to deal with her teenage life. Whether she was dealing with boys, shopping, school, family, it had it all for a teenage girl in the 90's. Melissa Joan Hart who played Clarissa went on to star in TGIF's Sabrina the Teenage Witch which is why she was able to creep her way onto the list, the girl had some star power. Now, did I ever watch Clarissa Explains It All? Maybe once..

Mr. Cooper was a former NBA played who turned into a teacher after his playing days were over. The show centered around him and his two female roommates who were just trying to get by making ends meat, living life to the fullest. Hangin' With Mr. Cooper was part of the TGIF lineup from 1993-1996 and became a staple in households across America. He was a funny charismatic guy who always seemed to have a good time. Thanks for the memories Coop! (I can call him "Coop" we're cool like that)

Never heard of him? Your loss. Ghostwriter was a ghost who helped a group of kids from Brooklyn solve crimes by manipulating any letters around him in order to make words. Him and the kids solved countless neighborhood crimes together using his abilities. Still laughing? You shouldn't be, ghostwriter is an American hero who just might have saved your life, without you even knowing it...

Balki (pictured on the left) played Larry's idiotic cousin from 'Mypos' Europe. Balki found his way into my heart when Perfect Strangers started airing as part of TGIF's lineup from 88-93. Balki was a foreigner with a heart of gold who often found himself in sticky situations but always seemed to get out of them with help from his cousin Larry. Perfect Strangers lasted 8 seasons and Balki was the star of them all. He may have been a naive idiot but he was our naive idiot...

10 Sci-Fi TV Shows We'll Be Glued To This Year

15 Underrated Sci-Fi TV Shows You Should Be Streaming Now