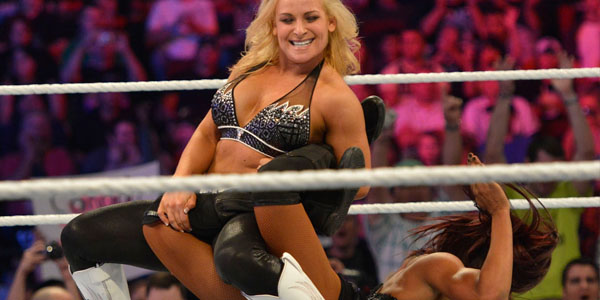 WWE.comNatalya may look like the pretty girl next door, she may come across as sweet and sassy on 'Total Divas', but this is actually one of the toughest WWE Divas in recent memory. What qualifies her that toughness? How about the fact that she's the first ever woman to train and graduate from the Hart Dungeon. Natalya spent hours getting stretched out by her uncles Ross and Bruce Hart, receiving advice from her father Jim 'The Anvil' Neidhart along the way. It helped Natalya that she'd been born into wrestling royalty, father Jim had married Ellie Hart who was Stu's daughter. With the Hart genes in her blood and all the right connections available, Natalya was destined to realise her dream of becoming a pro wrestler. She's now one of WWE's top in-ring female workers and a one time Divas Champion. The shoot style nature of the Dungeon's training has stuck with her, she recently trained MMA with UFC women's champion Ronda Rousey. The kind of holds and techniques Stu originated in the dungeon aren't too dissimilar from modern day MMA, Natalya would have had a basic understanding of Rousey's world.
WWE Writer
Grahame Herbert

Where Are They Now? - EVERY Wrestler On The FIRST EVER AEW Dynamite

10 Wrestlers Who Debuted As "Fans"