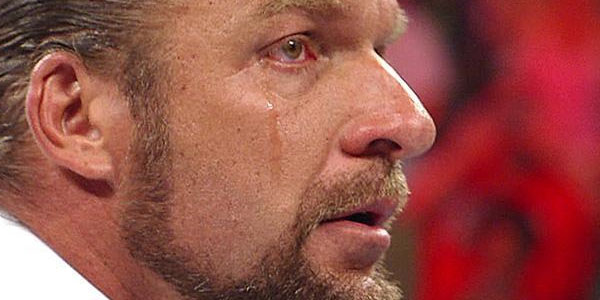 Pro wrestling has often been referred to as a "male soap opera", and that isn't far from the truth. The sport we all love so much has the ability to bring out a large variety of emotions in all of us, from the highest of highs to the lowest of lows. The euphoria that a great wrestling match or moment can give fans is second to none, but there are also those times when we get so caught up in the moment... so engaged in what is taking place... that we can't control ourselves anymore, and the tears begin to flow. There is absolutely no shame in admitting that wrestling has made you cry, and these ten moments did just that.

Instead of naming the "easy" choices like picking an entire tribute show (Owen Hart, Eddie Guerrero, etc), this will focus more on the specific moments that made people cry. Otherwise, you could just have tribute shows taking up half the countdown. These moments could have delivered tears of sadness, or they could have brought on tears of joy, but the one common denominator with everything listed here is that raw emotion that simply could not be held back any longer.

Who Pitched To Wrestle Dominik Mysterio First In WWE? New