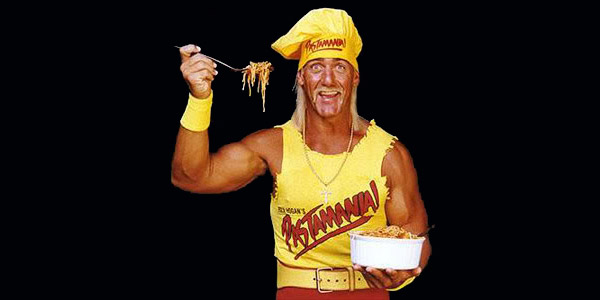 Celebrity endorsements for products and services are nothing new. From George Foreman smiling alongside a grill bearing his name to Michael Jordan lending his silhouette and label to Nike for a line of shoes, we know the drill by now. It's common, and generally speaking, it's accepted. But then we turn to the world of wrestling, and that's where things get strange. Sure, many a WWE star has appeared in a commercial for everything from Chef Boyardee to K-Mart to Fruity Pebbles, but in most of these cases, it's less a matter of one Superstar taking up a deal and more a matter of the promotion being a tie-in to World Wrestling Entertainment itself, who- if CM Punk is to be believed- is the one who arranges these deals (sometimes to the detriment of other talent, but that's a subject for another time). Moving a little further, and you'll find that there are a number of products mat warriors have lent their names to without any middlemen from Stamford getting in the way. These ten products are pretty much all between the stars (often past their glory days) and those writing the checks, with not a WWE logo in sight. Rest assured, some of the things they endorse can not only be surprising, but just downright weird.
Contributor
David Oxford
Contributor
Twitter

Former Nintendo Power writer, current Nintendo Force writer. Wrote the book on Mega Man (The Robot Master Field Guide). Was once fired by Vince McMahon. Dabbles in video games, comic books, toys, and fast food curiosities. Once had a new species of exotic bird named after him. It died. You can find more of his writings, musings, and other such things on his websites at Nyteworks.net.

Report: WWE Creative Has NOTHING For This SmackDown Star

10 WWE Wrestlers Who Are In Big Trouble