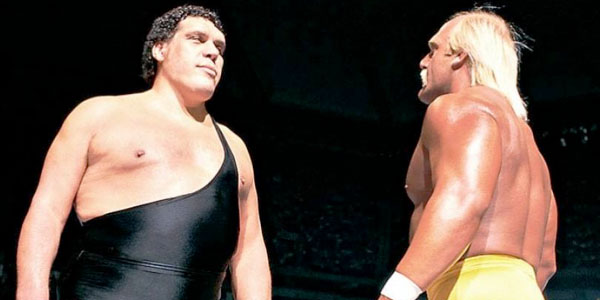 The Hulkster is back in the WWE and he's brought Hulkamania  in all it's slightly faded yet still blinding red and yellow glory  with him. The ultimate wrestling phenomenon was resting on the other side of the coin for a while, funneled through the significantly less interested fans of TNA. But with WrestleMania XXX rapidly approaching and the WWE Network's grand arrival, Hogan has returned, to aid the company that made him a culturally transcendent superstar of still unparalleled proportions. Since the legend has returned, there's no better time to give his rather patchy career a well-deserved retrospective. None of Hulk Hogan's matches have been technical masterpieces, but as one of the most popular stars in the history of the business, he's had his fair share of epic, high-profile showdowns. Whether he's pitted against former friends, ex-business associates, youthful future film stars or mythical giants, Hulkamania has helped millions of Hulkamaniacs have something (even if it's just an overly tanned man in yellow tights) to believe in. However, at the same time, he's been involved with some of the worst displays of pointless, ego-driven rubbish that's ever occurred in the art, instilling disappointment and often complete and utter confusion in the minds of anyone subjected. Simply stated, Hogan doesn't always know best. So as he's been such a divisive figure, here are five of Hogan's battles that were just plain awesome, followed by five which completely sucked:
Contributor
Leo Troy
Contributor
Twitter
Facebook

Mia Yim Wants To See THIS Released Star Back In WWE

5 Hall Of Famers To Appear On Tuesday's WWE NXT

Triple H Addresses The Future Of WarGames In WWE