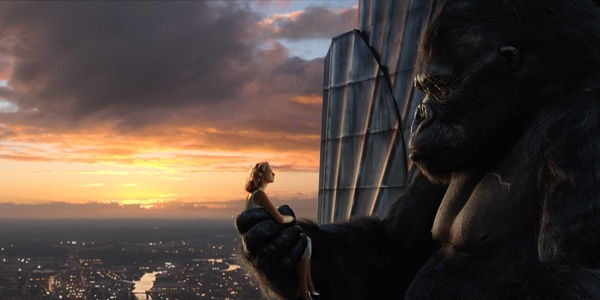 Nobody would have been blamed for their sharp intake of breath upon hearing the news that the 1933 classic King Kong was to be remade, even with the biggest director in the world at the helm, perhaps expecting a repeat of Emmerich's take on Godzilla. However, like Godzilla, it was a classic film that made sense to be remade. With 72 years between the original and the remake, times have changed and so have the movies - better visuals, a different style of acting and music, different editing and camera techniques, etc. It may be a clear-cut repeat of the original when it comes to the narrative, but as film has evolved, sometimes it is a sensible creative and marketing choice to evolve classic stories with it. Of course, that should never mean that the newer version is a replacement of the old, and you never get the feeling that Peter Jackson is trying to do that. It plays more like a homage, everything is very similar apart from the look of it, updating it for multiple newer generations. It still has a classic feel to it; a big, bold epic with beautifully epic music and slightly over the top acting that wouldn't have been out of place in movies 80 years ago. Accompanied by the wonderful set and costume design of New York, Jackson was correct not to make the film a contemporary one, instead keeping it fixed in a classic setting. It may have split audiences down the middle, but critics were generally favourable to Jackson's efforts, and rightly so. King Kong is huge, loud and fun, and the ape doesn't look too bad, either. Also, it doesn't slack when it comes to the quieter moments, and the surprising, but talented cast, all give in terrific performances, and even Jack Black proves that he's not a one-trick comedy pony. Peter Jackson's King Kong exists as the greatest film about a giant ape since 1933. Yes, even better than Mighty Joe Young.
Contributor
Matt Hirons
Contributor
Twitter
Facebook