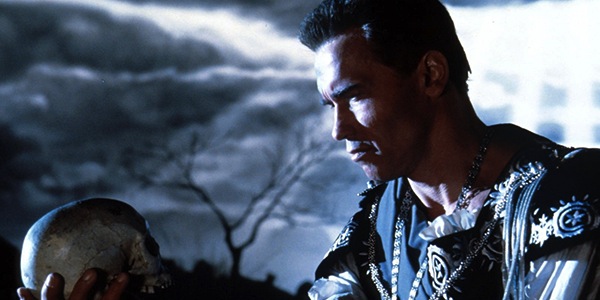 Who would have thought that an early 90s movie starring Arnold Schwarzenegger, written by Shane Black and directed by John McTiernan, would be such a crushing disappointment? It was certainly an ambitious film: satirising the action genre, The Last Action Hero was not averse to going meta and breaking the fourth wall, but it simply didn't connect with audiences and critics alike. The best moment in the movie comes when incredibly annoying child sidekick Danny Madigan becomes bored with watching Hamlet in school, and daydreams a version starring Arnie's fictional Jack Slater. The one minute 'trailer' that follows is genius; this Hamlet is deliberately anachronistic and both smokes cigars and uses automatic weapons in 17th Century Denmark, dispensing one-liners as he takes out familiar Shakespearean characters and shoots his way through the castle. Which he then blows up. Quite frankly, I would rather have seen this extended to a full-length movie than the bloated and uneven mess that was The Last Action Hero. To be or not to be? Not to be.
Contributor
Scott Campbell

7 Actors Who Really Messed Up Their First Day Of Filming

13 Movie Scenes Everyone Misunderstood As Kids

8 Amazing Movies That Only Feature One Actor