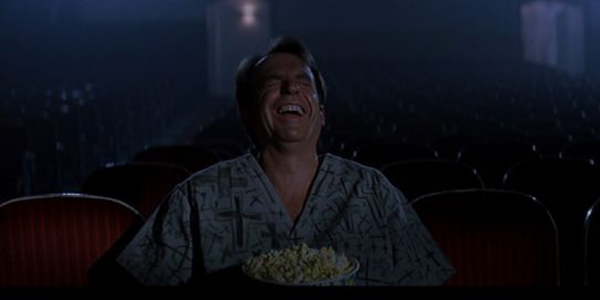 Though he is described by many as the father of modern horror fiction, H.P. Lovecraft is still a figure who is somewhat absent from horror in the cinematic mainstream. That said, this obscurity could be something of a blessing, particularly as modern horror seems to be stuck in a rut of ultimately uninspired rehashing of the Amityville and Exorcist tropes with a brief respite in some tawdry attempt to imitate Rob Zombie's innovative re-imagining of Halloween. True horror aficionados had something to get genuinely excited about when it was announced that Guillermo del Toro would be adapting At The Mountains of Madness for the big screen. Sadly this project fell through and we are left with only a few preliminary sketches, a screenplay and our own twisted imaginations with which we might attempt to imagine what this film may have been like. Scratch below the surface, root around the digital equivalent of the budget aisles and bargain bins however and you will find a plethora of movies that are either somewhat direct translations of Lovecraft's works to the silver screen or influenced both directly or indirectly by Providence's most distinguished gentleman. What is presented to you here is just a brief selection, a springboard if you will. This by no means a charting from best to worst, nor have I included every film initially considered for this list. You see, half the fun of Lovecraftian cinema is watching a film feeling that dawning sense of the weird, then discovering, like some doomed Lovecraftian protagonist, it's connection to the mythos at large. Therefore this list is by no means comprehensive and because it is an appetizer of sorts in may include films that aren't immediately obvious as Lovecraftian. These will serve therefore as an initiation of sorts to those new to the master, not least the film that deserves this lists honorary mention...

Lovecraft's work is still ultimately best enjoyed in it's original prose form and his life is almost as weird as his fiction. This documentary combines a discussion and exploration of both and is by no means a dry affair. Directors who have adapted his works, writers who have been influenced by him and even Lovecraftian scholars all passionately contribute to this film. Interview segments mix with biographical photography and artistic works to paint a comprehensive picture that will hopefully enable any new viewer to begin your own exploration into the Cthulhu mythos in all it's various mediums. Nor does that exclude those familiar with the man and his masterpieces being rich enough to yield warm infinite returns and curious introductions to the work of others.
Contributor
David Whittaker
Contributor
Twitter

David is grateful not only for the opportunity WhatCulture! has given him but also for the tens of thousands of views that you have given him. Particularly, when he still considers his efforts as somewhat clumsy and amateurish. Like H.P. Lovecraft, David will probably never be happy with his own work. Still this doesn't stop him studying E-Prime, Game Theory, Tantra, Magic, Media Analysis & Criticism along with many other things outside of his top secret day to day job and writing for WhatCulture! All of this in a no doubt conceited effort to improve not only his writing but also himself as a person.

10 Horror Movie Deaths You Were Totally Rooting For