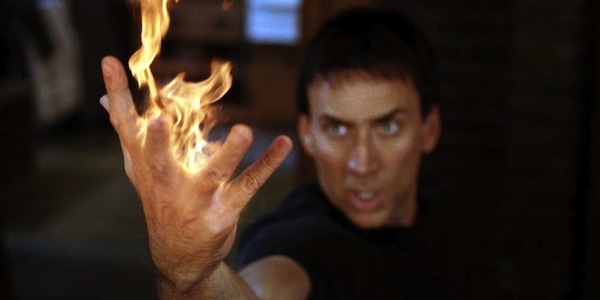 It's always a bad sign when studios withhold press screenings until 24 hours before a film's release, so expectations were't exactly high for Marvel's Ghost Rider. To be fair though, the odds were always stacked against anyone successfully adapting the story of a demonic stuntman who rides a motorbike and has a flaming skull for a head, but even so, Ghost Rider is a truly terrible film. The bad reviews didn't stop Sony Pictures from producing a sequel though, one which somehow beat all the odds to become even worse than the original. There is one saving grace for these films though... and that's Nicolas Cage. Don't believe me? Once upon a time, Cage was heralded as a phenomenal character actor whose energy onscreen made him one of Hollywood's most promising young stars. However, after he won an Academy Award for his role in Leaving Las Vegas, Cage turned insane. Each performance became more ridiculous than the last and suddenly, over acting became his signature move. Ghost Rider and its sequel, Spirit of Vengeance, contain some of Cage's craziest acting moments yet, including screaming frenzies that make Cage look like he's constipated and these scenes have since developed a cult following among ardent fans who follow Cage's every bizarre acting choice with fervent anticipation. Cage claims that he has developed his own method of acting, which he has coined 'Nouveau Shamanic'. For those of us who aren't pretentious and deluded, it basically means act like a douche bag in every scene, hamming up each line like it's your last... goddammit he sure is entertaining though.
Contributor
David Opie
Contributor
Twitter
Facebook

David is a primary school teacher who tries his best to turn every math lesson into a discussion on the latest Pixar film. Passions include superheroes, zombies and Studio Ghibli. In between going to the cinema, moving to South Korea and eating his body weight in KFC, David writes for a number of movie sites, http://becarefulyourhand.blogspot.co.uk/

7 True Stories Behind The Conjuring Movies