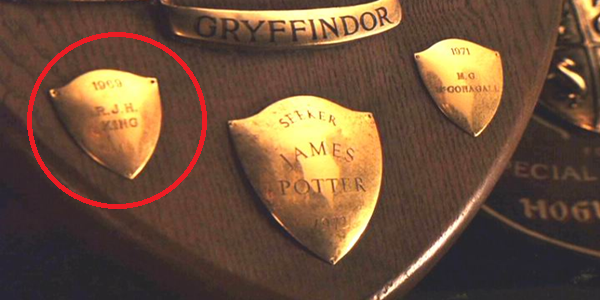 When Harry is being educated as to how much of a beast his father, James Potter, was on the Quidditch field his attention is pointed in the direction of the trophy cabinet which has his dads sporting award inside. Our attention is naturally drawn to James name so missing this Easter egg is forgivable but the other two names on the award are subjects of interest.

The inscription of M. G. McGonagall has caused debate among diehard Potter fans. Some (incorrectly) argue that it is the Transfiguration teacher Minerva McGonagall, however, we know that the head of Gryffindor House attended Hogwarts as a student circa 1947 to 1954 before starting as a teacher in December 1956. This would make it impossible for her to win an award as a student in 1971. It is more likely that it is Minervas younger brother Malcolm McGonagall.

An even more inconspicuous Easter Egg is the inscription of R. J. H King, which is actually a reference to John King, the supervising art director of the film.

Interestingly the trophy tucked away behind James Potters Quidditch award is Tom Riddles Special Award for Services to the School, which would become relevant in the next film. It seems ironic (and in rather bad taste) that the trophies of a murderer and his victim should be placed next to one another.

10 Actors Who Secretly Played Three Characters In The Same Film

10 Times The Movie Killer Was Hiding In Plain Sight

10 Movies That Redeemed Hated Characters In A Single Scene

10 Horror Movies That Forced You To Answer Impossible Questions