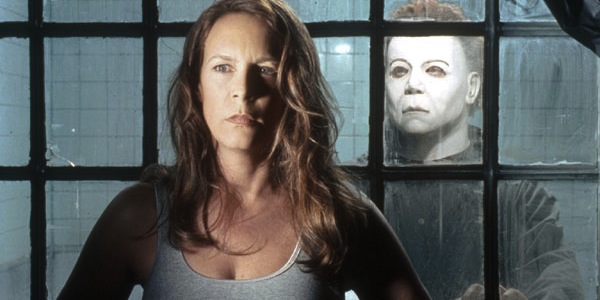 Rick Rosenthal's return to the Halloween franchise seemed ill-advised after this horrendous effort made its way limply into cinemas back in 2002. After the success of the previous sequel in 1998, it seemed some life had been breathed back into old Michael Myers lungs, especially with the return of original scream queen Jamie Lee Curtis. However, even her presence wasn't enough to prevent this 8th Halloween movie from stinking. The film opens in a mental hospital where Jamie Lee Curtis' Laurie Strode character has been spending her time since the events of H20, 4 years previously. But Halloween is rolling around again and there's no way Laurie is going to sleep easy knowing her crazy older brother is still at large. Her concerns prove to be warranted when he does indeed return to kill her, but this time she has a trap ready to end him once and for all. Sadly for Laurie, though, this is still the opening sequence of the movie and there's no way the main attraction is going to be killed off in the first 5 minutes. What did she think this was, Jason goes to Hell? After finally offing his sister - which according to Myers lore should send the mask wearing psycho back to sleep - Michael returns to his old home, presumably to chill and live out his remaining days in suburbia. But some dumb bunch of reality TV wannabes have decided to turn the place into the setting for a live haunted house online attraction, and as such it's down to Michael to teach them all a lesson about trespassing. Halloween Resurrection is a fun installment, but it's also the worst. It's another case of a filmmaker ignoring the events of previous movies (except H20, which is deemed the official sequel to Halloween 1 and 2) and misguidedly tries to inject the franchise with the comedic teen slasher groove made popular by Kevin Williamson. This just doesn't work here and no amount of Busta Rhymes doing kung-fu dressed as Michael is going to change that.
Contributor
Matt Aspin
Contributor
Twitter