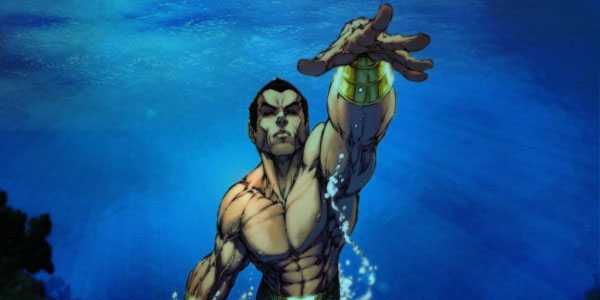 With a sequel to The Avengers officially confirmed by Marvel/Disney, comic book fans the world over will be contemplating which of the publishers other heroes could be added to the line-up, potentially getting their own solo movie as soon as 2014  filling the popularly acknowledged gap in the schedule alongside Captain America 2 that summer. Of course, we have to bear in mind that Marvel Studios do not own the film rights to characters as key to their comic book universe as Daredevil, Spider-Man, Wolverine or the Fantastic Four  all of whom have allied with or become members of the Avengers at one time or another  but with that consideration in place, here is another suggestion for Marvels Next Avengers Film:

Why?: Often depicted shouting his battle cry "imperious rex", Namor the Sub-Mariner - and so-called "first mutant"* - is the son of an American naval officer (from whom he takes his human surname McKenzie) and an Atlantean princess. He is best known as the ruler of Atlantis and, aside from his natural prowess in the water, he's gifted with super strength/speed/agility, and flight. Only really loyal to his people in the undersea city, he's not a guy who you will ever see hanging out with the others in Avengers Tower (you never get the sense he sees his allies as friends), but he might unite with them if his homeland were under threat - something he has done from time to time in the comics. Though Namor can currently be found battling against the Avengers as a member of Scott Summers' increasingly militant West Coast section of the X-Men (in the pages of Avengers vs. X-Men), his constantly shifting loyalties have also found him fighting alongside Cap and co when it suits. In fact he was a full member of The Avengers during the 80s, whilst he previously joined with Captain America (along with the original android incarnation of the Human Torch) to form WWII era superhero team The Invaders. He's also currently battling alongside Dr. Strange, Iron Fist, Silver Surfer and Hulk in the relaunched Defenders series. Then again he's also allied with just about every supervillain over the years too, with Doctor Doom and Norman Osborn among his recent teammates.

Namor is shamelessly arrogant and self-interested (from his point of view, pragmatic) in a way which would make Tony Stark blush, which means he'd bring a very different personality to the cinematic universe as well as a unique aquatic setting. His uncertain loyalties, hauty temperament and immense success with the ladies have seen Namor remain a very popular anti-hero among comic book fans for over 70 years. *One of only a few "mutant" characters for whom Marvel retain the cinematic rights, with most belonging to Fox's X-Men franchise. Story?: A Namor movie would mostly bear the burden of having to establish the underwater city of Atlantis as a credible part of the cinematic universe. The first Thor movie, which so convincingly grounded the realm of Asgard in the same reality as Iron Man, would seem to offer a good template for success: a pitch-perfect blend of self-aware humour and earnestness. Obviously that's easy to say and rather more difficult to achieve, but a film about a man in tight pants who lives under the sea that doesn't find time to poke fun at itself would be dead in the water - pun very much intended. Yet it must continue the Marvel Studios trend of taking the characters seriously and treating them with respect, fitting them into something like our reality whilst also doing their best to lift them directly from the pages of a comic book. When I say it should "poke fun at itself" I'm not talking Joel-Schumacher-Batman levels of camp or self-parody, but a few well-timed moments of comedy that enable skeptical audience members to feel as though they are laughing with the film rather than at it. For instance, when Thor first meets Jane Foster and her gang of scientists we are invited to laugh at the incongruity of his behavior and manner of speech in the mid-West American setting. As soon as Thor's demeanor has become normal to us the joking all but stops. This is no doubt why Thor meets a group of identifiable, audience surrogate human characters very early on. In the case of this movie, that human interaction could occur with record-breaking Olympic swimmer Todd Arliss. Arliss is better known as the long-serving Namor nemesis Tiger Shark (below): a man who was given the genes of the Sub-Mariner and that of a shark during a genetic experiment by Dr. Dorcas - another member of Namor's rogues gallery. He'd be a perfect villain because he could reasonably be expected to go toe-for-toe with Namor in an underwater bout. This is in no way canonical, but here's my idea for a Namor movie:

At the beginning Namor learns of and realises he must leave his kingdom - and venture up to the surface world - in order to find out more, lest the threat destroy Atlantis. Upon reaching the US Namor catches the attention of Arliss, an Olympic swimmer training on the beach when Namor emerges from the sea. Perhaps Arliss is going full-throttle at it when Namor effortlessly overtakes him en route to shore. He can't believe that any man could swim that much faster than him, so he becomes obsessed with Namor who tolerates his presence because it flatters his own immense ego. At some point Namor does something public and spectacular, saving some lives and appearing on the news, at which point Dr. Dorcas - a marine biologist long-obsessed with myths of Atlantis and about to lose his funding (or whatever) - decides he wants to capture this new hero and (naturally) study his internal organs. Dorcas is unexpectedly aided by Arliss who is not-so-secretly incredibly jealous of Namor's abilities and longs to be the world's greatest swimmer again. If that sounds like a rubbish reason for villainy (a desire to be the world's best swimmer), then just imagine that being THE BEST at this sport is this guy's entire identity - he's probably trained every day since he was 7 - and Namor's aloof, casual disregard for his own natural skills is maddening and spirit-crushing. Arliss therefore tricks Namor, who is captured by Dorcas, on the grounds that the scientist will share with him the secret to Namor's power. The experiment works but Arliss - also spliced with a tiger shark due to Dorcas' insane genetic tinkering - is not the same man as before: having become a more animalistic creature - the Tiger Shark. Namor, badly wounded by his ordeal, escapes and tracks down Tiger Shark out of a mixture of revenge and an obligation to end a threat he (sort of) created by coming to mainland. Maybe he talks some sense in Arliss and they unite to defeat Dr. Dorcas. Or maybe he kills them both like the raging, vengeful sea king he is. Either way it could work. In the end he finally catches up to and learns the nature of the colossal threat to come.

There are obvious problems with that outline: for a start the original quest bears little relevance to the bulk of the movie and every event seems based on coincidence (Arliss at the beach, Dorcas watching the news). But that's my pass on it anyway and I think it could work with a few changes here and there. Likelihood?: Marvel producer supreme Kevin Feige has hinted at a Namor movie in the past, which makes an eventual big screen take on the character quite likely. Though where it falls in the studio's list of priorities is difficult to say. Guardians of the Galaxy, Dr. Strange, Ant-Man and even the Inhumans have all been talked about quite recently, so maybe it's one that's on ice until they find the perfect star, director and release window. As far as current allusions to the character in the existing movies go, Iron Man 2 pinpoints a mysterious oceanic location on a map detailing the locations of meta-humans known to S.H.E.I.L.D., so there is at least a hook there. Casting?: As recently as 2010 Daniel Dae Kim, the Korean-American star of Lost, put forward his own candidacy for the role, apparently saying:

"Living in Hawaii, I'm always in the water - and I think Sub-Mariner looks Asian. So I feel like if there's anyone I could play, it would be him. I've met with Marvel about a few other things, but if and when it becomes appropriate - sure, if they'd have me."

Namor does indeed look Asian in the comics, so this makes some degree of sense. The "if there's anyone I could play" part of the quote also alludes to another fact: there aren't very many Asian superheroes. There might be relatively few black superheroes, but there are that many fewer Asian ones (at least in American comic books), so casting Namor this way might help prevent The Avengers from seeming like a "whites only" club. Pursuing this avenue, how about Thai Ong Bak star Tony Jaa - for some bone-crunching authenticity in the fight scenes - or, in a similar vein, emerging Indonesian talent Iko Uwais (below), currently seen kicking ass in breakout action hit The Raid.

Different approach, but Alexander Skarsgard, with darkened hair, would have the physique and his star is certainly on the rise: exactly the sort of actor Marvel might want to get involved. Besides his dad was in The Avengers already! Meanwhile Disney could do worse than Glee hunk Cory Monteith if they want to snare some of that tween demographic (I hate myself for writing that). As for the supporting cast, Arliss should be played by Channing Tatum - an athletic jock type who could realistically switch between lovable innocent and psychotic douchebag. Bryan Cranston would make a good Dr. Dorcas - in that he looks intelligent but also a little bit insane (at least in Breaking Bad), but not in the traditional "mad cackling villain" sense. Director?: The dream choice - and it's never going to happen - would be James Cameron. Not only would that guarantee a huge budget and a lot of buzz: there isn't another director in Hollywood (of not the world) who has spent as much time at the bottom of the ocean. Cameron's vision of Atlantis would be something to see. The Abyss meets Avatar essentially. For a long time Cameron wanted to make a Spider-Man film, so maybe he has unfinished business in the world of superheroes. More realistic but less exciting would be Jonathan Mostow, director of Terminator 3 and Surrogates. Mostow was supposedly pretty close to making a Namor movie sometime in 2006, so maybe Marvel would approach him? For what it's worth he made a submarine movie once too. Let us know your thoughts about a Namor movie in the comments below and check back soon as we reveal more candidates for Marvels Next Avengers!If you missed them, here are our first five entries in this series:#1: Ms. Marvel#2: Doctor Strange#3: Luke Cage and Iron Fist#4: Ant-Man and Wasp#5: Black Panther
We need more writers about The Avengers, Sub-Mariner, Marvel, Marvel Comics, Namor and Avengers: Age Of Ultron! Get started below...
Contributor
Robert Beames
Contributor
Twitter

A regular film and video games contributor for What Culture, Robert also writes reviews and features for The Daily Telegraph, GamesIndustry.biz and The Big Picture Magazine as well as his own Beames on Film blog. He also has essays and reviews in a number of upcoming books by Intellect.

10 Actors You Wrongly Think Are In Movies