12. Who Will Play The Four Horsemen? 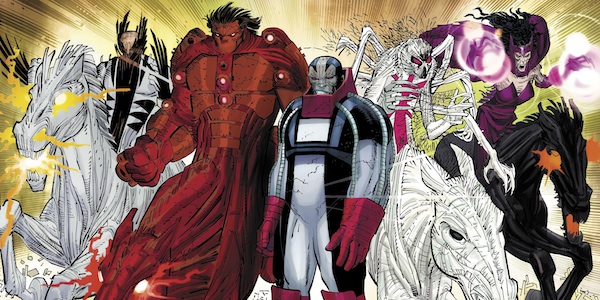 MarvelIf you stayed to watch Days Of Future Pasts post-credits scene, youll have noticed on the distant dusty hills the shadowy outlines of four figures on horseback. Known as Horsemen Of Apocalypse, theyre a crew of mutants enlisted as henchmen by the films colossal baddie - Apocalypse. Sometimes theyre involved of their own volition, other times theyre kidnapped for their powers, which Apocalypse often augments via his unique grasp on technology, basically turning them into super-duper mutants. The quartet adopt the titles Famine, Death, Pestilence and War - with the mutants in question constantly changing, depending on the comic incarnation. Apocalypse is a sneaky devil, enlisting a roster of well-known superhero names at various points in the canon; The Hulk becomes War, Angel becomes Death (clever), and Wolverine as a later version of Death! Its highly unlikely Singer and co. will have Wolvie changing sides, although maybe for a spell itd be a welcome recipe for inciting much dramatic tension - especially if he comes face-to-face with a young Jean Grey, turning tables and such. The unique trait of Apocalypses Horsemen is their fluctuating nature, meaning any mutant can be coerced into duty. Itll provide the filmmakers tons of scope to cultivate his band of evil wrongdoers - handpicking any mutants from a heaving back catalogue. With Channing Tatum having inked a deal with the studio he's a good bet to appear as Gambit in the movie, and this could hint towards the third cycle of Horsemen - featuring Gambit, Gazer, Polaris and Sunfire.

Ups & Downs From Doctor Who 12.8 - The Haunting Of Villa Diodati