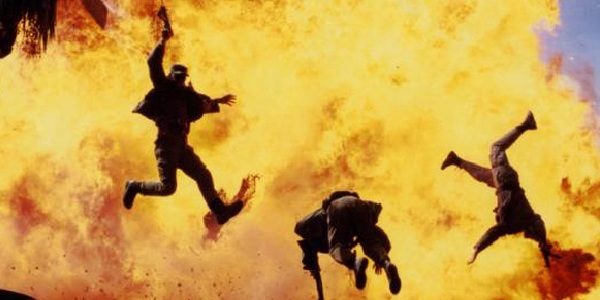 What was so fun about The Expendables was seeing all these big action heroes working together for the first time. The ultimate best of the best. Well in TV we have a whole plethora of kick ass action heroes. And rather than going for the who would win in a fight argumentimagine what would happen if these characters worked together? Lets start with the leader. I think we have two men vying for this position. Seasoned action stars who could bring years of experience to the team. One of them obviously has to be Gibbs (NCIS) but for the second I would add the father with a dangerous edge, Jack Bristow (Alias). He has his secrets. His wife is a traitor. And he trained his daughter to be a spy from early childhood. This is not a man you would want to cross. And can you imagine these two vying for position? They wouldnt bicker. Theyre far too cool and ruthless for that. Now for the gun wielding, bomb diffusing, jumping out of aeroplane, car-racing all round cool guys. Let me introduce you to three of the best. Jack Bauer (24) has noting to loose. He died. Hes been a fugitive. Hes saved whole cities from a vast array of terrorist plots and hell torture you if he believe it will be a means to an end. Then well add former marine and Hawaii 5-0 commander, Steve McGarret. Hell jump out of planes and will venture into deepest, darkest North Korea to save his friends. And finally well throw in the mysterious, former CIA agent wholl take out a car fall of baddies with a machine gun without a moments hesitationJohn Reese (Person Of Interest) And because we need some comic relief, lets throw in demon hunting bad asses and bickering siblings Dean and Sam Winchester. They fought the devil and saved the world from the apocalypse, but they can argue other their actions to kingdom come. And the plot. There has to be a plot? Did the Expendables films have a plot? Surely what we want is the TV equivalent of cool action heroes kicking ass. And against these seven action heroes of TV, no one stands a chance.
Contributor
Baz Greenland
Contributor
Twitter

Friends Quiz: Can You Remember These Obscure Details?

11 Iconic TV Shows That Should NEVER Be Revived

10 Most Outrageous Stories Revealed On The Graham Norton Show

Scrubs Cast: Where Are They Now? New