14. Sheldon Chooses Where He Sits Everywhere Methodically, Except When He Doesn't... 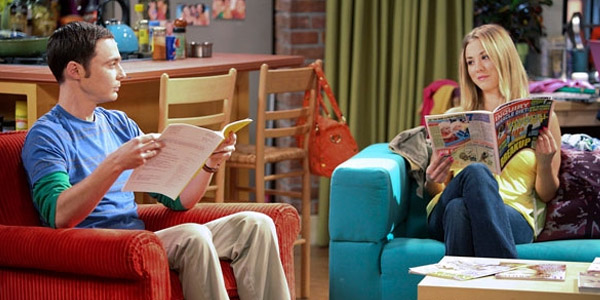 The show is very careful to establish that Sheldon chooses a "spot" in every place he frequents. He did so in Penny's apartment, and in the Cheesecake Factory, and he sits in the same spot in the cafeteria every day, not to mention, choosing only the sweet spot to sit in cinemas (regardless of who is sitting there at the time apparently.) BUT, in "The White Asparagus Triangulation" in Season 2, Sheldon apparently ignores everything that makes him Sheldon and randomly sits on Penny's couch to discuss Leonard's failing relationship with Stephanie (as he sees it,) despite the fact that he has already previously chosen a spot in Penny's apartment as his seat. Yes, he's flustered at the possible loss of his team's new McCoy, but it's unforgivably casual of him.

13. Why Did Sheldon Choose His Spot Again?

Yet another issue relating to Sheldon's spot, and this time regarding the origin story. In"The Staircase Implementation" we learn that Sheldon always sat in the same spot, even before Leonard bought the couch, suggesting his commitment, but in that episode it is revealed he chose the spot for the following factors:

"This seat is ideally located both in relation to the heat source in the winter and a cross breeze in the summer. It also faces the television at a direct angle allowing me to immerse myself in entertainment or game play without being subjected to conversation."

But three years later in the pilot episode, when he justifies his spot to Penny, he states the following:

You either want to talk or you don't.

There are two problems concerning the broken lift in Howard, Leonard and Penny's building, aside from the fact that the narrative device means the set-dressers have to use the same set over and over to convince that the characters are walking up stairs (which now feels more like an in-joke than anything else.) Firstly, the lift was broken twice according to a contradiction in the show's timeline. In "The Nerdvana Annihilation" in Season 1, when the gang buy the time machine, Leonard says the lift has been broken for two years, but then in "The Staircase Implementation" in season 3, it is established that Leonard's failed experiment blew up and broke the lift seven years previously, which also makes his need to tell Howard the lift is broken seem odd, since Howard was present. And that also confuses the episode in which Howard claims he can diagnose the problem with the lift, before giving up and stating unequivocally that it is broken. Which shouldn't be a surprise, since he watched Leonard blow it up.
Contributor
Simon Gallagher
Contributor
Twitter

Friends Quiz: Who Said This To Chandler - Monica Or Janice?

The Office Quiz: How Well Do You Remember These Workplace Injuries?

Brooklyn Nine-Nine Or It's Always Sunny In Philadelphia Quiz: Who Said It - Boyle Or Kelly?

It's Always Sunny In Philadelphia Quiz: Who Did It - Charlie Or Mac?

How I Met Your Mother Quiz: Can You Match The Scene To The Season?