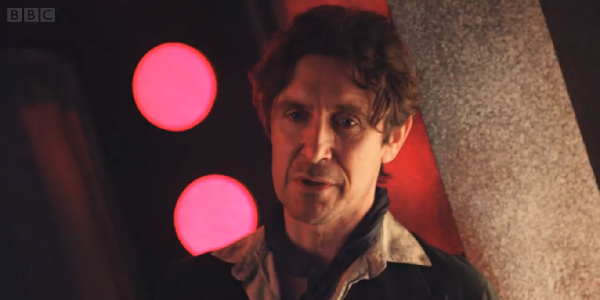 Here at WhatCulture, you may have noticed that we've gone a little crazy for the return of Paul McGann. The highlight of the 50th anniversary for many fans (myself included) has been the return of the Eighth Doctor last week in 'Night Of The Doctor'. Before the 14th November 2013, we only had one on-screen adventure to go by; the infamous TV movie from 1996. With its 'Americanised' style, bizarre plot decisions (The Doctor is half human???!!), a overtly-hammy version in the Master and the first Doctor/companion kiss, it certainly raised a few eyebrows. Personally I think it's not great but there's a lot to be enjoyed too. Most importantly (and this is something a lot of fans agree on), Paul McGann was rather good as the Doctor. So as we wait for the 23rd November of November to arrive, I'm taking a break from my retrospectives of the 50th anniversary year to take a look at the Eighth Doctor and the possibilities to bring him back on our screens for more adventures. Because, he was quite frankly, brilliant in 'Night Of The Doctor'. I loved it when he listed all thing things he could do with the last four minutes of life. (Knitting?!) This six and a half minute minisode was quite special and it helped to do a number of things. It connected the Eighth Doctor not just to Classic Who (we had the regeneration for McCoy's Seventh Doctor to McGann's Eighth in the TV Movie) but to Nu Who through the John Hurt's 'War Doctor', who will play a prominent role next Saturday. It also canonised the Eighth Doctor's Big Finish companions. And it brought the Eighth Doctor to modern audiences. Plus that little extra Doctor regeneration thrown into the mix, turning Capaldi's future Doctor into the Thirteenth and final regeneration? But call me greedy, I want more! A random TV movie. An internet-based minisode. Paul McGann has done a plethora of audio adventures as the Eighth Doctor. He even designed his own costume for the later stories. But he's always made it clear he would be happy to make more on screen appearances. Given the reaction to 'The Night Of The Doctor', I think the BBC should seriously consider it. (And yes I know there are little things called budgets, but let's put our fingers in our ears and pretend that's not a factor) Here at WhatCulture, fellow writer Chris Swanson has already written An Eighth Doctor Primer. So with that knowledge at hand I present five ways to bring Paul McGann back for more on screen adventures as the Eighth Doctor.
Contributor
Baz Greenland
Contributor
Twitter

10 Deleted TV Scenes We Never Got To See

The Big Bang Theory Quiz: Who Am I?

11 TV Moments Everyone Was Waiting For (That Never Happened)

Ultimate Friends Female Quiz - How Well Do You Know Rachel, Monica And Phoebe?

Friends Quiz: Who Dated Them - Monica, Rachel Or Phoebe?