Steven Moffat is the most celebrated television writer in the UK, if not the world. His work on the first four series of Doctor Who propelled him to the lofty heights of head writer in 2010, and he's the brains behind that show with Benedict Cumberbatch and Martin Freeman. You know, that other one that a few people here and there watched. But with great power comes great plotholes; Moffat's not only one of the most loved men to write the Doctor, he also has his fair share of critics who claim his storylines don't make sense. Well, if Steven won't give us the answers, I will. Here are the top ten Moffat plotholes that Who fans talk about, and a little explanation on each of them. (Note: I can't say I've got all of them right, but hopefully I can shed a little light on them.)

10. Why Doesn't The Dalek Parliament Reflect What We Already Know About Daleks? 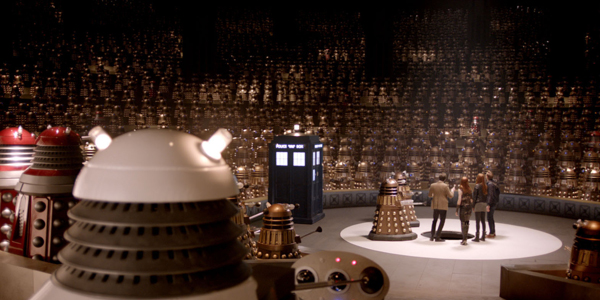 'Asylum of the Daleks' was a divisive episode for Moffat and Who alike; on the one hand, the heartbreaking Oswin story introduced Jenna-Louise Coleman brilliantly, but on the other, there was so much discontinuity with everyone's favourite foes. Why is it offensive to destroy beautiful hatred now, when in 'Victory of the Daleks', the new Daleks destroyed the old ones? Didn't Dalek Sec say that Daleks had no concept of beauty? And wasn't Skaro destroyed in the Time War? Whilst there are some gaps in Dalek folklore here, 'Asylum of the Daleks' acts as a reset for the old pepper-pots; for the first time since the revival of Who, an empire of Daleks has had time to rebuild their parliament and appoint a prime minister. And if Skaro was destroyed in the Time War - Russell T Davies didn't actually specify that it was - than they certainly have the power now to rebuild it. Clearly though, the Dalek Prime Minister was lying. It's not offensive at all for them to extinguish the mad asylum Daleks; he was just too scared to do it. That's why they sent the Predator, after all.
Contributor
Mark White
Contributor
Twitter

The Big Bang Theory Quiz: Who Said It To Bernadette?

Game Of Thrones Quiz: In Which Season Did They Die?

The Originals True Or False Quiz: How Well Do You Remember Season 1?

Friends: The Progressively Harder Who Said It Quiz