9. The Girl in the Fireplace 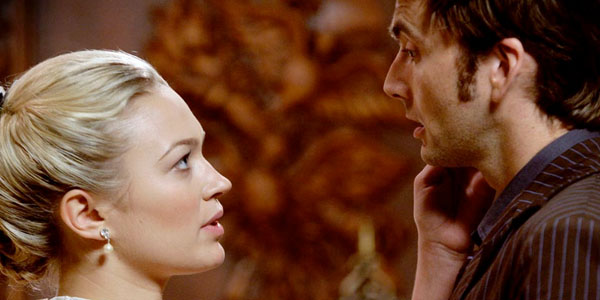 Midway through Series 2 the Doctor, Rose and Mickey are stranded on a derelict alien ship, which appears dedicated (or obsessed) with the mistress of the French king Louis XV - Madame Reinette de Pompadour. Through various time windows, the Doctor is able to see her throughout her life, whilst also trying to solve the mystery of clockwork assassins who for some reason need Reinette. The episode is not average Doctor Who - the plot between the Doctor and Reinette is intriguing, whilst the threat which the androids pose not just to the Doctor, but to Rose and Mickey, who are stranded on the ship, creates suspense. The continued sinister objectives of the assassins also makes it an intense episode of new Who. The Doctor shows plenty of charm in this episode, which would become an integral part of the character, trying to work out who the mysterious woman is whilst remaining on strictly friendship terms with her. Indeed, the chemistry which develops between the two, and the saddening ending, makes it an emotional episode of Doctor Who, and questions whether the Doctor does actually harbor feelings for Rose. Despite this, it reels back from the science-fiction elements of the show, which may put some viewers off. A very good episode, which really showcases the Tenth Doctor, yet suffers from its misguided focus.
Quizzes

The Office: You'll Never Get 100% On This Jim Halpert Quiz

Me? I'm 17 years old, from Dawlish, Devon and studying (tirelessly) at Exeter College. I love pretty much anything, am a fan of numerous TV programmes and films, countless books and topics, from Sherlock to the Cold War, Doctor Who to Muse and my ambition is to become a journalist in any field which I have an interest in, and I hope to show my opinions (although varied) to the full.

10 Actors That Went From Their Best Movie To Their Worst