6. The Hound is Still Around 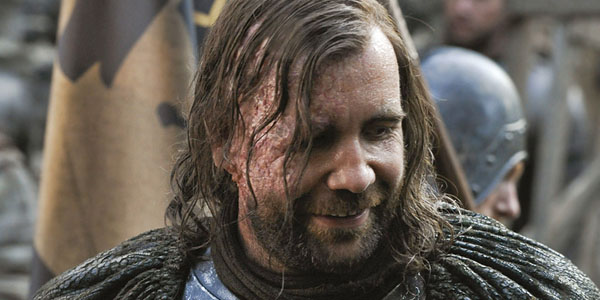 As readers and viewers, we all know that Arya Stark has no love for Sandor Clegane AKA The Hound, especially after he murdered her friend Mycah and kidnapped her from the Brotherhood Without Banners. The Hound figures he can make a quick buck if he ransoms her to her family. They strike out at The Twins, yet as they arrive just as the Red Wedding Massacre is going on and they cannot make their way to The Eyrie since it is too close to winter. They continue to wander, with the Hound sometimes taking on odd jobs to make some money. At one point they encounter Aryas other nemesis Polliver and the Tickler. A battle ensues and the Hound is gravely wounded. They wander into the Forest and the Hound lies under a tree to die. He begs for Arya to show mercy and put him down, but she is still angry and feels it is better to let him suffer and die in agony, and just leaves him there. As readers, we are left to believe he dies. Later, we read that Brienne and company land on the Quiet Isle, in their search for Sansa and Arya. They meet an Elder Brother that speaks of the Hounds final moments. They also come across a grave digger that is larger than most men, and the horse that The Hound was riding also seems to have ended up on the same isle. The Elder Brother leads the reader to believe he has indeed passed on, but his choice of words is curious. He states that the Hound is dead and Sandor is at peace, which some take to believe means that the creature that was the Hound is no more, as Sandor has come to peace with who he is and is now living this simple life away from violence and torture.
Contributor
Samantha Cass

Way too much time watching TV and movies has led me to believe I was meant for more than answering the telephone for a living.

Brooklyn Nine-Nine Quiz: Who Said It - Gina Or Rosa?

The Office Quiz: What Would Dwight Choose?