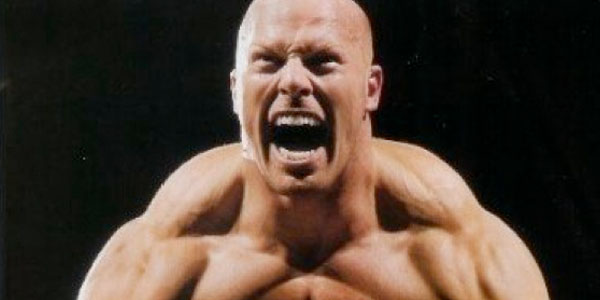 WWE.comGrowing up in Australia, Nathan Jones became one of the country's most wanted men when he committed a series of armed robberies over the course of two years. When he was finally caught, Jones served seven years in a maximum security prison and was introduced to powerlifting in jail. Soon after, Jones became Australia's Strongest Man and was an awesome sight at 355 lbs. Unfortunately for Jones, his success as a powerlifter did not translate to the wresting ring. Jones was immediately stuck with the Undertaker (poor guy) and was made his protege against the fearsome team of Albert and Big Show. Jones was scheduled to be the Undertaker's partner at Wrestlemania XIX against the heels but WWE officials realized he would absolutely suck and pulled him from the match at the last minute, using a pre-match attack as an excuse. After being sent back to OVW to try to improve his skills, he returned as a heel and was placed on Brock Lesnar's Survivor Series team alongside Albert, Matt Morgan, and the Big Show. Probably owing to the fact that 4 out of the 5 on that team are absolutely terrible, Lesnar's team lost to Kurt Angle's team and Jones was quickly shuffled down the card. Soon, Jones started to hate the WWE's travel schedule and, after waiting for a WWE Australian tour, he simply left from the airport and never returned. https://www.youtube.com/watch?v=zRN1BZs20jI As an aside, Jones was generally thought of as a clown in the locker room, mostly due to his lack of ring skills but also due to a peculiar "talent". Allegedly, years of steroid abuse had turned one of Nathan's pectoral muscles into a, for lack of better term, breast. His body allegedly began producing milk from one of his nipples, thus guaranteeing his lack of credibility from now until forever.
Contributor
Mike Shannon
Contributor
Twitter

WWE Wrestler Says He Had "Residual Heat" After Returning