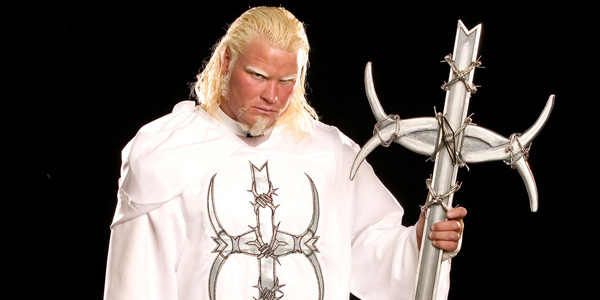 wwe.comOne of the protege's of Jim Cornette in OVW, Kevin Fertig performed as Seven in the Memphis territory, basing his character on the Seven Deadly Sins. After kicking around the independent scene, Fertig was brought up to the main show and started competing in tag matches alongside Tyson Tomko in 2003. In April 2004, vignettes began to air to hype everyone for the debut of Mordecai, a religious zealot who dressed in all white attire and promised to rid the world of sin. The promos were very well produced and people seemed genuinely interested in his debut for the company which would come at Judgment Day 2004 against Scotty 2 Hotty. When Mordecai's debut finally happened people were, safe to say, completely unimpressed. As rumors flew that Mordecai was being prepped for a feud with the Undertaker (why does he get stuck with all the new losers?), people realized that Mordecai wasn't as physically imposing as the vignettes made him out to be. As a matter of fact, he was rather lean and not the physical force that people expected. His in-ring work was rather uninspired as well and his use of the Razor's Edge as a finisher didn't exactly set the world on fire. https://www.youtube.com/watch?v=ZXzOJ9leBrc Mordecai disappeared almost as quickly as he appeared but that wouldn't be the end of the story for Kevin Fertig. He was rehired by WWE in 2006 and rechristened as Kevin Thorn, ECW's resident vampire. As a member of the New Breed stable in WWECW, Thorn participated in the feud against the ECW Originals before being released by his own request in 2009.
Contributor
Mike Shannon
Contributor
Twitter

8 Wrestlers Who May Have Wrestled Their Last Match

10 Exact Moments Wrestlers Realised They Were In Trouble

Major AEW Prospect's Contract Due To Expire In May 2023

Details On ANOTHER Backstage AEW Fight In 2022