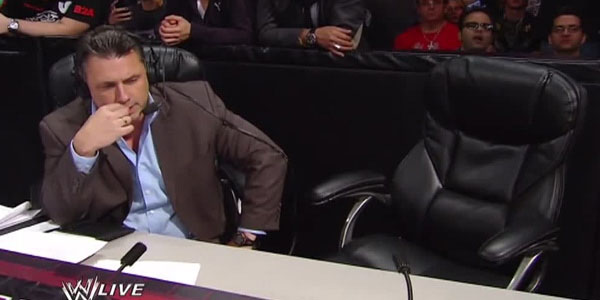 Jerry Lawler isn't always the most popular of announcers within the Internet Wrestling Community, with people feeling his act has grown stale, but on September 10th, 2012, people were able to put that hate to the side and root for him like they had never done before.

During a live episode of Raw, Lawler collapsed at ringside, suffering a heart attack. It was a frightening time, as nobody knew what was going on, but news was breaking on Twitter quickly, thanks to fans in attendance. Lawler had gone quiet, and for the most part, so had Michael Cole. Then we saw reports that Lawler had slumped over, and that the WWE medical staff was at the announce table working on him. You could see that fans on-camera were standing, looking over at the announce table in concern. Even the men in the ring at the time (it was Daniel Bryan and Kane VS Darren Young and Titus O'Neil) kept being distracted as they looked to see what was happening.

When Michael Cole finally announced what had happened to Lawler, not only could you hear fear and concern in his voice, you could see it in his eyes. Cole and Lawler had grown to be very good friends through their years of working together, and you could see Cole on the verge of losing it as he worried about his friend.

This was a weird moment, because not only did it change the way people looked at Lawler, at least for one night, but it also changed the way people looked at Cole. Until this, Cole was still viewed primarily as that annoying announcer that so many people hated from his run as a heel. The way Cole kept his composure through one of the most difficult moments of his career in wrestling won people over, and just like that, his sins of the past were forgiven.

Lawler ended up being fine, and would return two months later, but it was still an obviously unscripted moment that caught everyone off-guard, and had them not focusing on face and heel, but life and death instead.

10 Current WWE Double-Acts That Must Never Split Up

Could There Be A Way To Give WWE's Retribution A Decent Burial?

10 Times Wrestling Promotions Came Back From The Dead