10. HBK's Back Injury Was Over Embellished 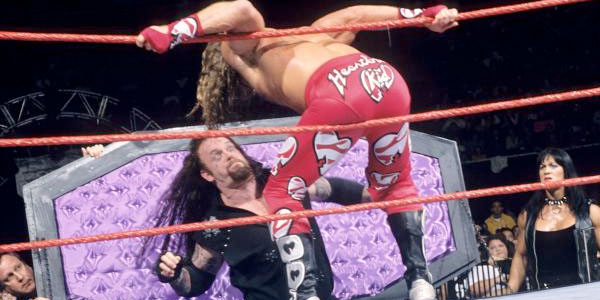 Shawn Michaels is one of the greatest stars of our time, and is the subject of more than his fair share of backstage shenanigans. In 1998 he suffered a back injury during a casket match against The Undertaker.

This lead to an early retirement from wrestling, though he still made sporadic appearances on TV for the next 4 years. He eventually returned to the ring in 2002, and continued to wrestle until 2010, where he lost his "retirement match," ironically against The Undertaker.

This sounds reasonable enough though. He had a back injury, had surgery, and then later felt well enough to perform again. What strikes the fans as odd is how can a man who was nearly crippled from a back injury return to wrestler for the next 8 years, and why did he keep getting paid during his entire absence? Compound that with the fact that Michaels was a notorious party animal and drug user at the time of his first retirement, it seems as if there was more to the story.

It has been said that the real reason Michaels left was because he needed to enter rehab for an addiction to painkillers. Ok, so he wanted to get clean, but why continue to pay him for so long?

That is where things get weird. According to some, Vince McMahon and Shawn Michaels were actually lovers and that is why Vince continued to pay Shawn. Granted, most of those sources aren't very credible, but some people swear it is the truth.

Brandon Tischer is an avid wrestling fan who has been watching since he was a kid. He, along with his friends, have made a pact to never miss a Wrestlemania together.

10 WWE Stars Who Have Gone AWOL