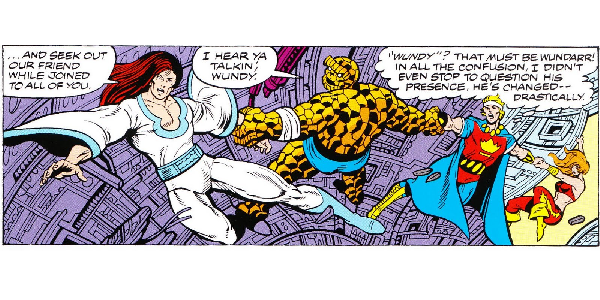 Marvel ComicsWe know what you're thinking, how could a guy who dresses like he's a member of a cult be a brilliant lost Marvel character? He doesn't even sound like he'd be part of a good cult with a name like that. Underestimate Wundarr the Aquarian at your peril though, dear reader, because he's actually pretty cool. The sole survivor of a doomed alien planet, Wundarr nipped any further Superman comparisons in the bud straight away by making his first appearance in the pages of horror book Man-Thing. It took another year for this weird new creation to be adopted by the superheroes of the Marvel Universe, but adopted he was, taken under Ben Grimm's wing and billed at one point as "Marvel's Latest, Greatest Star". With a similar power set to the Last Son of Krypton, Wundarr nevertheless carved out his own niche by adopting The Aquarian codename and having his abilities boosted by a shadowy cabal of villains. When he awakens from a coma caused by the Cosmic Cube he discovers both new powers and a new purpose. Most superheroes have different origin stories that lead them to the same cause: to protect the human race from threat, to stand up for the little guy, to eliminate crime, some variation on that. Wundarr, meanwhile, had the adorably flower child life mission of spreading peace and tranquillity to his fellow man, helped by the increased mental and physical abilities endowed upon him by the Cube. He even starts a cult to perpetuate his teachings and goal. Of course, a pacifist hero wasn't long for the ZAP!, POW!, BANG! world of action-packed superhero comics, and besides a brief appearance during Civil War he's barely been mentioned since.
Contributor
Tom Baker
Contributor
Twitter

10 Most Inappropriate Deadpool Storylines Ever

10 Times Batman And The Joker Saved Each Other

10 Comics That Mocked The Reader

10 Most Powerful Swords In Comics History

The Batman Sequel: 10 Possible Villains (And Who Should Play Them)