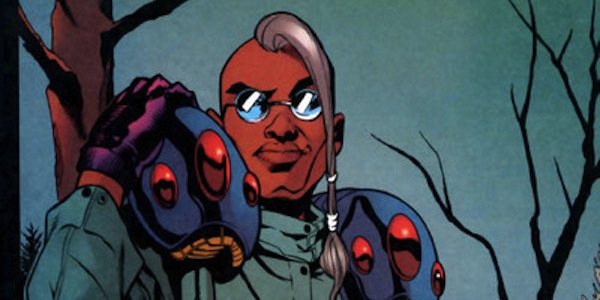 Once you've worked your way through all the "normal" superhero identities, it becomes an increasingly more difficult task to conjure up a character who feels, well, original. Nowadays, you could be forgiven for thinking that all the good superhero ideas have been taken up, so you can't exactly blame the writers who had to go down another road to spark their creativity. And that road just so happens to be one paved with bricks made out of insanity. Sure, a whole host of naff, forgettable superheroes have emerged over the course of time, though none of them are quite so as unbelievably ridiculous as the bizarre creations we've assembled for inclusion on this list - all of whom were presumably created in less than hour after a week-long binge on radioactive vodka.

For all intents and purposes, Squirrel Girl was created to bring a sense of fun and goofiness back to Marvel comics, which at the time had gone all boring and broody. Unfortunately for Doreen Green (Squirrel Girl's real name), she was given the preposterous ability to actually control squirrels. Laugh if you will, but on several occassions Squirrel Girl has managed to utilise her powers to defeat super-villains, including one Dr. Doom. If you think that's dumb, well... you're right, it is. But not as dumb as the way it happens, which took place during her first ever comic book appearance. After ambushing Iron Man and suggesting they team-up, he completely freaks out and declines. When he's suddenly captured by Dr. Doom, Squirrel Girl calls in an army of, yes, squirrels, who attack his ship and chew the power cables. The day is saved and Iron Man gains a newfound respect for Squirrel Girls. Not really: he goes off and promises he'll "put in a good word with the Avengers," which we can only assume is a filthy lie. Oh, and she also has a pet squirrel called Monkey Joe, 'cause why wouldn't she?
Contributor
T.J. Barnard

10 Most Brutal Villain Beatdowns In All Of Comics

10 Vertigo Graphic Novels You Must Read Before You Die