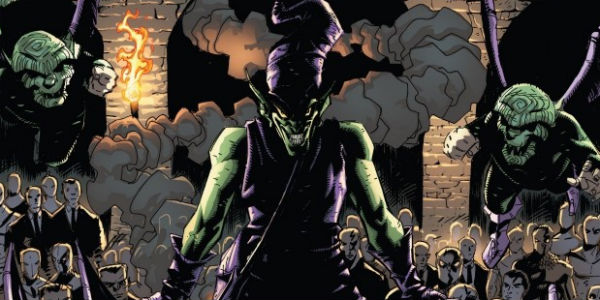 Spider-Man and the Green Goblin have been inextricably linked since the green and purple-clad villain first appeared in 1964s Amazing Spider-Man #14. While a case could be made (especially by current readers of the Superior Spider-Man series) that Doctor Octopus is Spider-Mans arch nemesis, no other villain has caused Spidey more pain and suffering than the Green Goblin. The Goblin, whether it be the original incarnation of the character, Norman Osborn, his son Harry, or whoever is currently under the mask in the pages of Superior (remember, we still havent seen his face) has always found a way to strike at Spider-Man in gut-wrenchingly personal fashion. Even now, after Otto Octavius swapped brains and bodies with Peter Parker, creating the Superior Spider-Man, the watershed moment for the character is expected to be his inevitable confrontation with the Green Goblin. The Goblin Nation storyline marks the end of the Superior-era at Marvel, and will lead to the return of Peter. The biggest mystery that remains is just how much pain and misery will the Green Goblin cause the Superior Spider-Man? Will he attack Spider-Mans girlfriend Anna Maria, or strike at him through his Aunt May? As the following 10 moments from Spider-Man history will demonstrate, nothing is ever off the table when it relates to the Green Goblin and his hatred for the Web Slinger. And the Goblin almost always finds a way to top himself:
Contributor
Mark Ginocchio
Contributor
Twitter
Facebook

Mark is a professional writer living in Brooklyn and is the founder of the Chasing Amazing Blog, which documents his quest to collect every issue of Amazing Spider-Man, and the Superior Spider-Talk podcast. He also pens the "Gimmick or Good?" column at Comics Should Be Good blog.

What Happened To Everyone Who Joined The Fantastic Four?

10 Most Heroic Things The Joker Has Done

10 Wolverine Stories We Would Love To See In The MCU