FIRST APPEARANCE: DETECTIVE COMICS #66 (1942) Two-Face is the villainous alter-ego of Harvey Dent, Gotham's esteemed, clean-cut District Attorney, who has half of his face disfigured after mob boss Salvatore Maroni throws acid at him during a trial. Dent's grip on what's good and bad soon enough slips, and in creating for himself a villainous persona, decides his actions largely on the basis of a coin flip, to help, or to kill. More contemporary tellings have accentuated his friendship with both Comissioner Gordon and Batman, and also the mental illness that his disfigurement has caused. He was played with so-so campiness by Tommy Lee Jones in Batman Forever (to the extent that exactly half of his face was painted purple), whereas Aaron Eckhart lent the character a far more memorable, gritty portrayal in The Dark Knight, complete with sophisticated facial effects that totally pushed the PG-13 rating. 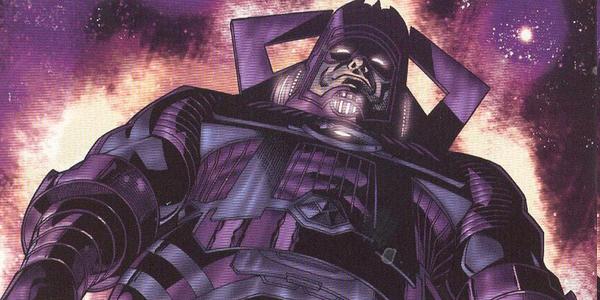 FIRST APPEARANCE: FANTASTIC FOUR #48 (1966) If this was a list of the 100 greediest comic book villains of all time, then Galactus would easily be in the number one spot. The guy devours whole worlds, for heavens sake, giving whole new meaning to the term "all you can eat" - that's one massive appetite folks. However, this isn't a list of our favourite greedy bad guys, so Galactus must make do with his respectable positioning at number 14. Despite his ridiculous appearance, Galactus has been an ever present threat in the Marvel Universe for over four decades, first appearing in what is now known as The Galactus Trilogy way back in 1966. Since then he has munched his way through countless worlds, fortunately failing to get his gigantic gums around Earth, thanks largely to Mr Fantastic's funky foursome and The Silver Surfer. Galactus is as old as time itself and is probably the most powerful villain in the history of comics, as responsible for the creation of life as much as he is the elimination of it. Nonetheless, he has had only minimal success in his many battles with the heroes of Earth, something that is made light of time and again in his appearances on kids' TV show Superhero Squad.

FIRST APPEARANCE: THE AMAZING SPIDER-MAN, #3 (1963) Once a renowned villain, Otto Octavious has enjoyed renewed heights of villainy in more recent run-ins with Peter Parker, including one instance in which he - SPOILER WARNING - swaps bodies with the reporter, leaving Spidey stuck inside the dying cancerous body of Doc Ock. Ever since his inception, Doc Ock has been portrayed as - believe it or not - a mad scientist, noted for the four giant, mechanical "arms" that he has built, which are key to his plan to bring down Spider-Man and prove his genius. Though Ock's age and stocky physical appearance doesn't make him appear to be as outwardly threatening as some of Spidey's other enemies, there's no mistaking his stature as one of the character's most feared foes. His appendages can not only move with a superhuman level of speed, but he is able to perform multiple actions with different arms, such as engage several enemies, each arm capable of crushing several tons of metal.
Contributor
WhatCulture
Contributor
Twitter

10 Superpowers You Never Knew Batman Once Had

Alpha Flight: 10 Things You Need To Know About The MCU's Rumoured Super Team

10 Lesser Known Comics That NEED To Be Movies

10 Most Powerful Humans In Marvel Comics