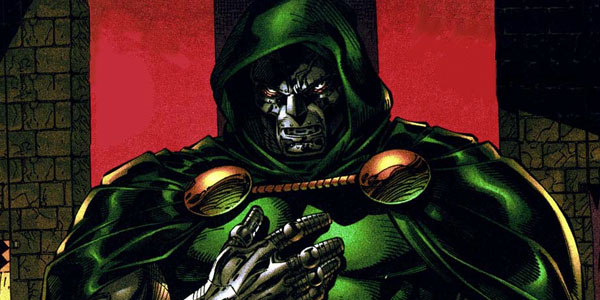 Comic book history is littered with fantastic and formidable super-villains. Some are very clever and excellent schemers, some are super-powered to the extent that they pose a physical threat on a huge scale, and some are just downright nasty. Some, however, have it all: Doctor Doom is one of those villains. Doom has been the scourge of countless heroes and hero teams since his first appearance in The Fantastic Four #5 way back in 1962, most notably as a villain of the titular team of the aforementioned comic. But he has also faced -off with the likes of the Avengers, the X-Men, Spider-Man and the Silver Surfer. Let's take a look at 5 reasons why I think that Victor Von Doom is the best villain in the history of comics books...

Doctor Doom's appearance is a two-layered thing - and both layers are pretty terrifying. On the outside, Doom strikes an imposing figure. Wearing his gadget-filled metallic armour with face mask and green robes and hood makes him look very fearsome, but it is beneath the exterior that he looks truly terrifying as Doom is terribly scarred. Depending on the source material, the cause of the scarring differs. He either put his metallic mask on when it was still boiling hot, or an explosion occurred in one of his college experiments but, either way, he's ended up looking pretty nasty. The extent of the nastiness is, again, something that is source material dependent. But, more often than not, his appearance is depicted as being pretty monstrous - so much so that he can't even bear to look at himself (see the above picture).

8 Batman Villains Who Haven't Appeared In A Movie Yet

10 Things Everyone Forgets About The Justice Society Of America

10 Most Inappropriate DC Comics Storylines Ever

10 Comic Plot Twists That Were Hiding In Plain Sight

10 Most Powerful Humans In DC Comics