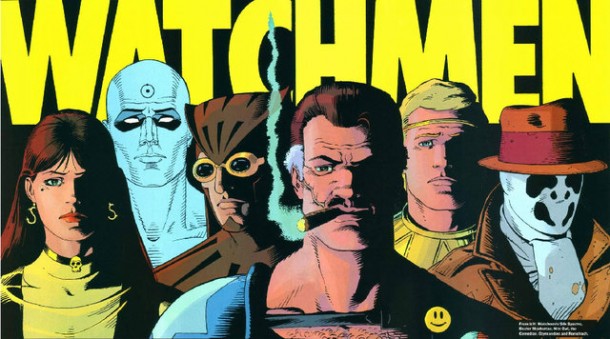 Watchmen is DCs highest-selling comic collection. Ever. So, while DC are neither confirming nor denying the swirling rumours of the four miniseries being explored by different writer and artist teams under a single editor, it would not be a surprise that the powers-that-be are considering digger deeper into this potential goldmine. There seems to be a lot of other articles out there pre-emptively lambasting comic fans for not liking the idea of expanding the Watchmen universe. Which is fair enough. Sort of. After all, there will definitely be ire, no doubt fuelled by Alan Moore himself as he is inevitably asked about it by interviewers when hes trying to talk about work he didnt write several decades ago. I fully respect and understand Moores reasons for not wanting anything to do with DC or these properties anymore but, on the other hand, as a huge fan of Watchmen, thats not to say I wouldnt mind certain areas of the story world being explored and dramatised further. One beauty of Watchmen is definitely how much it crams into its densely-detailed 12 issues, but there are still aspects of the story Im curious about  not just as expanded backstory, but as good stories of their own. This is perhaps my main problem with the idea of more Watchmen  theyll be prequels. Generally prequels tend to be redundant (did X-Men Origins: Wolverine explain anything that we didnt find out in a few brief minutes of well placed exposition in the first X-Men movies?) and filled with nods to an audience who know what is to come. And so to avoid the prequel comics becoming a series of knowing winks to an audience every time the Comedian spills ketchup on his badge or Ozymandias orders fresh squid at a restaurant, my main hope for the prequels is that they are their own self-contained stories that just happen to be set before the events of Watchmen. So here are five story angles I wouldnt mind seeing more of from the world of Watchmen:

This is probably the thing I want to see most in any new Watchmen property. The breakout stars of both series and the film were the larger-than-life characters like Rorschach, Doctor Manhattan and The Comedian. Something guaranteed to raise the hackles of fans everywhere would be to try and mimic Rorschachs journal or Doctor Manhattans time-encapsulating narration. But graphic novels like Brian Azzarello and Lee Bermejos Joker give a fresh spin on one of the most beloved characters by having one of his henchmen as the narrative focal point. Brand new characters or one of the many existing supporting players from the series could create original stories. When Rorschach refused to never quit when the Keane Act was introduced, was there a cop investigating the same cases Rorschach was? Or was he/she leading the assignment to actually hunt down and unmask Rorschach? Could we see a cynical bad guy point of view as the criminal underworld escalates theatrically to match the costumed heroes? From a Veidt employee to Silk Spectre fanboy, any possible story for a Watchmen prequel would instantly become more appealing if told from an original or unlikely viewpoint.

Thinking about Watchmen, its very easy to get hung up on the psychosis, kinkiness, impotence and arrogance that launched a thousand and one gritty subsequent superhero stories using vices and flaws for shock more than character depth. So perhaps a flashback to the earlier age of the Minutemen as the worlds first superhero team step out of the shadows is in order. But its only rose-tinted nostalgia that says these were more innocent times (it was World War II for one thing). While the crumbling of the Minutemen is an obvious story, the team coming together and working together around their big personalities in an important time in history has plenty of potential for drama. And maybe their story would be better told (or spun) by their PR man Laurence Shexnayder (who went onto marry the original Silk Spectre). While it could easily become a cynical story about media manipulation, a story about a PR man to all extents and purposes leading a costumed crime-fighting team in a time when people needed iconic heroes could be a more upbeat story but still with plenty of drama and conflict between the disparate heroes.

Hollis Masons Under The Hood adventurer memoirs are the only evidence of the transition from Night Owl I to Dan Dreibergs Night Owl II. A story demonstrating the transition of legacy characters could show the problems inherent of inheriting a superhero mantle as well as the growing pains of moving from Golden Age to Silver Age style heroics. We know that Hollis and Dan were good friends by the time of the main Watchmen storyline...but was the handover as smooth as Hollis book tells it? While the two Night Owls are two of the more pleasant characters in the Watchmen universe perhaps, the one case that haunts them or nearly tore their acquaintance apart is re-told as flashbacks from the point of view of one of their weekly beer and reminiscing sessions.

2. Silk Spectre II On Her Own

Laurie Jupiter/Silk Spectre IIs storyline became defined by her familial and romantic relationships with the other heroes rather than her own connection to the central plot  and, as the only lead female character, this always niggled a little. While Laurie was reluctant to take on her mothers role as a costumed crime-fighter  but once there, its definitely suggested that Laurie didnt just enjoy the thrill but also the kink of her alter ego. With the role of women in comics (both as characters and creative teams) never more scrutinised, a story that focussed on Silk Spectre II  a young, female, revealingly-clothed, non-powered hero  using her guile to take down criminals and justify her place with the hero community. Not just a crass girls can do it too storyline but one that showed a teenage character forced into a life of vigilantism and finding their own line between right and wrong when surrounded by the imposing characters of the other heroes and allowing a closer look at the glory days that Laurie has left behind by the time of the main Watchmen storyline.

We understandably dont get to know too much about Adrian Veidt/Ozymandias in the main Watchmen plot, otherwise wed probably cotton on much sooner that hes the villain of the piece. And yet Veidt is clearly a very complex character with a very public persona. While Veidt may have been hatching his plan for global peace from early on, a self-contained miniseries about an admired hero quitting the cape scene and going public with their identity two years before the governments Keane Act would have forced him to could provide opportunities for social commentary on the rise to power of celebrity and figureheads. Despite society turning against masked heroes in that era, Veidt managed to turn his adventuring and showmanship into a massive industry. Would he miss the thrill of crime-fighting? How would the rest of the hero community regard him unmasked? Something in the vein of Brian K Vaughan and Tony Harris Ex Machina series could provide a good tonal comparison to how Veidt turned his passion for adventure into a new battlefield fit for the worlds smartest man as Veidt wins over a nation.
Want to write about Watchmen and Alan Moore? Get started below...
Contributor
John Hunter

John Hunter hasn't written a bio just yet, but if they had... it would appear here.