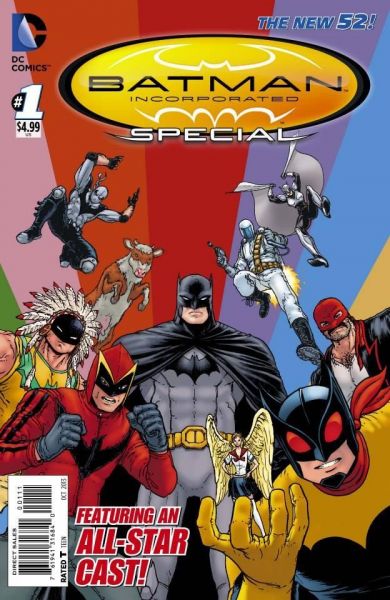 Grant Morrison's Batman Incorporated may have ended when his 7-year Batman run ended but what of the individual members of Batman Inc? Enter Batman Incorporated Special #1 where find out what our favourite international Batmen are up to now that Leviathan has been defeated. This is the last story in the collection but let me get this out of the way first  Batcow gets her own story! Batcow! In the 7 years Morrison wrote Batman, he gave us some amazing additions to the Batman legend, but among my favourites and one of the surprise hits with the readers was the cow Damian saves from the slaughterhouse in New 52 Batman Incorporated #1 whom he names Batcow. In a silent story, Batcow  whom artist Ethan Van Scriver has given a cape for some reason (I still laughed)  is grazing in the grounds of Wayne Manor when she hears a car chase. Robbers with guns, cops chasing them, an innocent family caught in the middle  Batcow to the rescue! One of the things I love about it is that Batcow's not doing any crazy comic book antics, she's just doing what any cow does  but with a knowing, vigilante purpose behind it. Anyway, the brilliant Chris Burnham writes/draws a Jiro Osamu (the Batman of Japan) and Canary story where the pair investigate how human organs wound up in vending machines. The evil Doctor Inside-Out, whose own organs are on  yes - the inside-out, has been abducting guests from a capsule hotel and harvesting their insides. I enjoyed Burnham's wacky Batman Inc. #11 issue so liked this short as well, and seeing Burnham's art is always a pleasure. Joe Keatinge writes the Knight story where Beryl is mourning the loss of her friend Cyril, the former Knight, and wondering what she should do next. If you liked Paul Cornell's Knight and Squire book a few years ago (and why wouldn't you, it was great!) then you'll notice some of the things from that book like the Time in a Bottle pub and other British superheroes like the Mechanic show up in this story. Morrison already revealed Beryl becoming the new Knight in his run of Batman Inc but Keatinge goes back and shows her thought process of getting to that place when she becomes the new Knight and Batman of Britain. I loved Emanuel Simeoni's expressive art and his design of Beryl's Knight outfit but the standout addition to the comic is the introduction of the villain, Spring Heeled Jack. A classic Victorian character, Jack can leap very high in the air  that's basically his superpower. Keatinge jazzes him up by giving him a few more and makes him a viable character for a more substantial Knight story in the future. There are other excellent stories  there isn't a weak one in the book  featuring Raven Red and Man-of-Bats by Nathan Fairbairn and John Paul Leon, and a Nightrunner, Dark Ranger and El Gaucho story by Mike Raicht and John Stanisci, that round out a very solid coda to one of the best Batman series ever published.

But the biggest impression this book makes is how each of these stories could be prologues to larger stories for each of these characters. Every one of them could have their own series as each writer/artist shows here - there's nothing but untapped potential. Burnham doing a monthly Jiro/Canary title? Keatinge writing a new Knight and Squire book? The Battlin' Bovine Bat-Cow? Are you kidding me, why aren't these titles available right now? The framing device to this collection is Batman sat in the Batcave reviewing the Batman Inc. case files (Batman plays a very minor role in this comic, making three brief appearances  this book is firmly about the rest of Batman Inc) and at the end when he's asked if he wants to archive them or not, he clicks No  so maybe there's hope yet for more from these wonderful characters? Morrison provides the afterword as a summary of his time on Batman and a fond farewell to "the greatest character pop culture ever created". I do think he underestimates his impact when he says his work will be forgotten in future generations  he did so many things with the character that I can't imagine his time with Batman will ever be overlooked, even though other writers will now write for the character. Batman Forever? Morrison Forever. Batman Incorporated is one of the most enjoyable Bat-titles the character's ever had and this Special reminds us why. Even if you've not read the main series, pick up this one-off and introduce yourself to some of the richest, most interesting characters in the New 52 who, criminally, don't have their own titles. Moo! Batman Incorporated Special #1 by Chris Burnham et al. is out now

Birds Of Prey Reviews: 12 Early Reactions You Need To See

Want to write about Batman and Reviews? Get started below...
Contributor
Noel Thorne
Contributor
Twitter

10 More Best Things The MCU Did Differently To The Comics

10 Supervillains Who Thought They Were The Hero