4. Death Of The Family - Scott Snyder And Greg Capullo 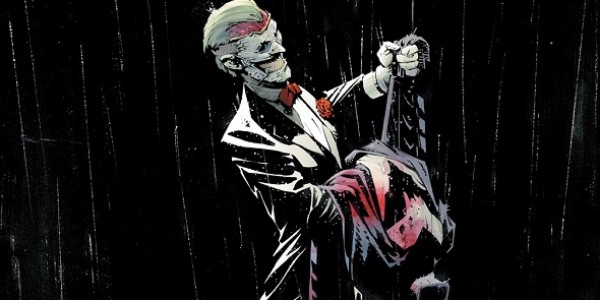 When the New 52 launched, one of DC's biggest characters, the Joker, was taken off the board immediately and remained unseen for a year. But what was he up to in that time? When he returned for the Death of the Family arc, he announced that he knew the secret identities of every member of the Bat-Family (minus Batman) and that he would be reducing their numbers, one by one, so that it could be like the old days again  just him and Bats! With every Bat-Family member and their loved ones in the crosshairs of the Joker, Batman must stop the madman once and for all. Who lives? Who dies? Scott Snyder's story is suitably epic for such an epic character, taking in all the famous spots that have meaning for Batman and Joker from ACE Chemicals to the Gotham Reservoir (filled with Jokerfish of course!) to Arkham Asylum. Snyder's Joker story is very visceral horror from the opening scene in GCPD HQ when Joker appears to reclaim his face to the nightmarish scenes in Arkham to the putrid rotting skin Joker's wearing strapped to his head like a mask, getting more and more disgusting as the story wears on. Among the many ideas Snyder explores in the story is the relationship between Batman and Joker which has Joker declaring his love of the Dark Knight, framing their relationship as a sick bromance or with Batman as a Dark King and Joker as his trusted advisor, the Fool. Batman himself questions his own moral code, pondering whether killing Joker would be the right thing or not given his inability to be rehabilitated and his propensity for escaping Arkham. Death of the Family is a modern, exciting and intense story featuring two of comics' greatest characters as they battle once more in the grim darkness of Gotham City. Filled with amazing characterisations and ideas from Snyder and simply incredible art from Greg Capullo, Death of the Family is a modern masterpiece.
Contributor
Noel Thorne
Contributor
Twitter

10 Worst Things Namor Has Ever Done

10 Comic Book Heroes Betrayed By Their Own Sidekicks