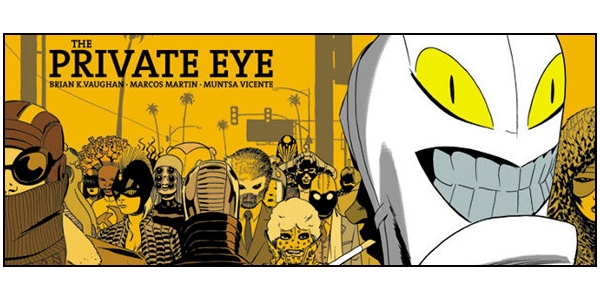 Brian K. Vaughan, known for such critically acclaimed series as Y The Last Man, Ex-Mechina and Saga has just started a new series with artist Marcos Martin, known for his work on Robin: Year One and Daredevil. The first issue of the series has been released not in print or even on Comixology, but offered through a pay-what-you-want basis on their own site Panel Syndicate. Set in a future where absolutely nothing is what it seams, Private Eye takes a look at our culture and imagines where we may be heading. In the comic, physical alterations have been taken to an extreme level. Whether by surgery, holograms or just latex masks, everyone hides their true identity. Want to look like another gender or race? You got it. Extra eyes and green skin? Sure. Fish face? Why the hell not?*

This is a book where not everything is explained, and that is both a detriment and a benefit Vaughan is not a writer to explain everything in issue #1, but over time instead. The reader may feel somewhat disoriented in this first issue, but the author commands enough respect at this point to be trusted. The dialogue throughout flows nicely and most characters have unique idiosyncrasies that set them apart from each other. The protagonist who goes by the name Patrick Immalmen (though like most things in this comics, that name is not real) runs a sort of detective agency. Rather than being hired to solve crimes however, Patrick is in the business of learning hidden truths about people. Like a paparazzi for normal people, he infiltrates and observes to discover who people really are, and how very different they are from the they pretend to be. The last few pages of Issue 1 get pretty crazy, as we not only get our first glimpse of what transpired to make the world the way it is, but a surprising twist that nicely sets up the first arch, if not more The world of Private Eye is one that requires an artist who is up to the task of creating a world full of people whose appearance defies rational though ; luckily, Marcos Martin is just such an artist. The art has a few inconsistencies and odd angles, but not enough that it becomes an issue. The characters and world look great, and the protagonist has a very unique face despite the fact that he looks the most human of anyone. Where the art really shines though is in it's two full page spreads that show off the city and people of this strange world. Like a terrifying Where's Waldo, these pages show of the world of The Private Eye in grand scale. 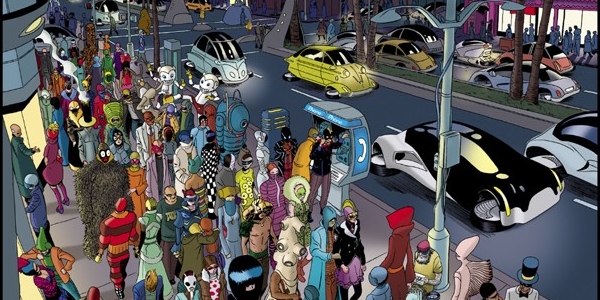 The art is both unique and interesting. The Private Eye is very stylized, and not at all like the Jim Lee style that is so prevalent in today's comics. I for one am very enamored with Martin's art style, but it may not be everyone's cup of tea. Brian K. Vaughan is one of the best writers in comics today, and Marcos Martin is on the rise with his recent work on Mark Waid's Daredevil. Between the compelling new world and the great art, this comic is not to be missed. The pay-what-you-want mentality of its release is just the cherry on the cake.

*Apparently the future is a Furry's paradise.
Want to write about Brian K. Vaughn, Reviews and The Private Eye? Get started below...
Contributor
David Ochart
Contributor
Twitter

David Ochart is a born and raised enthusiest. The offspring of a Trekkie and a History buff, and the middle child of 7 equally avid siblings, he has spent much of his life firmly entrenched in nerd-culture. From Batman to Godzilla to The Legend of Zelda, if David is not reading watching or playing, he's contemplating and analyzing. Follow him on Twitter @DavidOchart and check out his Blog at AnIllustratedLife.Tumblr.Com

10 Times Spider-Man Was A Real Jerk

10 Insane Comic Endings That Totally Came Out Of Nowhere

8 Awesome Comics That Were Unbelievably Cancelled

Can You Name These X-Men Villains? - Quiz

DC Or Marvel Quiz: Who Said It - Darkseid Or Thanos?