Reading a Jonathan Hickman comic is a bit like reading a 1000 page epic crammed into a 100 pages or so - he doesnt lack for ideas or ambition or scope, but boy is he in a hurry to get everything done quickly! Unfortunately this is to the detriment of the book and The Ultimates Volume 2 is an often confusing and tedious comic. The book opens with a battle between Xorns Celestials, Zorns Eternals and Reed Richards Children before Reed starts World War 3, Hulk single-handedly leads a charge against Richards City, SHIELD becomes marginalised by the emergency government and Fury is forced to go on the run as Iron Man, Thor and Black Widow head off to stop Richards once and for all. Did I mention this is only a 128-page book? Hickmans brevity on these enormous events is part of what makes this book strangely boring to read. Its one thing to have epic events, its another to make the reader care about them and Hickman lacks this ability. A writer must focus on the characters to make their plights matter to the reader, but Hickman is unable to write convincing characters as hes too caught up with constructing massive storylines - the actual characters are mere afterthoughts rather than the centre of the stories. Instead the characters behave stupidly to service the plot. For example, the US President single-handedly launches all of the nukes in Americas arsenal - can he do that? I guess so? - before going before Congress to inform them hes launched all of the nukes at Reed Richards City! Uh... right. Whatever you say, Hickman! It doesnt end well for the President or the Congress as Reed retaliates in kind. 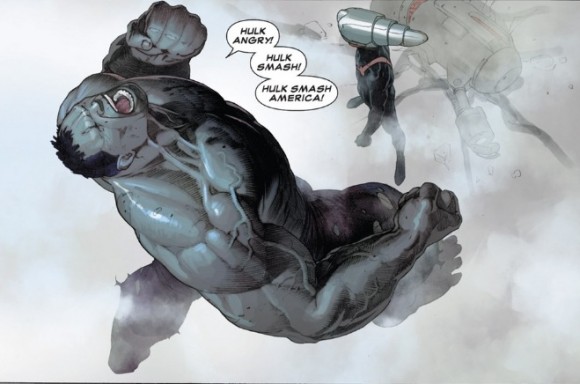 Heres what bothers me about Reed, supposedly the smartest man in the world, hell, one of the smartest in the universe - he still bothers with war. He still fights, he still cares about petty things like violence when a super-evolved person as he claims to be would seek coexistence and peace to focus on weightier and more interesting things than war. Its a failing in mainstream comics that the writer feels obligated to end a story with violence regardless of how hes written the characters. The rapidity with which Hickman barrels through the story doesnt help explain it any better especially when the plot is so confusing and badly put together anyway. Xorn and Zorn are in the book initially playing a big part but then disappear altogether; Furys storyline all but disappears halfway through the book. This choppy style of writing can be explained with the changing of artistic teams as Hickman and Esad Ribic leave halfway through the book to be replaced by writer Sam Humphries and artist Luke Ross. But even then Ross cant keep up with Marvels rabid release schedules and another 4 artists get drafted to pick up the slack! The constant changing of the art doesnt aid the flow of the story at all. The book is really just a bore to read. Hickman may have grandiose ideas but he has no clue how to pull them off effectively. On the page it reads like a total mess, a story featuring familiar characters doing things urgently and saying dramatic things while the reader sits there, totally unfazed by the entire story because its confusing and feels pointless. This book reads like an outline for a series rather than the finished product. I think Hickmans a good ideas-man but he isnt much of a writer and really needs to learn how to take his time to flesh out his ambitious storylines before hurrying on to the next one. Reading The Ultimates is ultimately an unsatisfying and rather tiresome experience. Ultimate Comics: The Ultimates, Volume 2 by Jonathan Hickman et al. is out now in paperback
We need more writers about Marvel Comics, Reviews and The Ultimates! Get started below...
Contributor
Noel Thorne
Contributor
Twitter

8 Most Powerful Avengers Ever

10 Comic Book Heroes Betrayed By Their Own Sidekicks

10 Superheroes You DON'T Want Saving You

10 Comics Villains Humiliated By The Joker

10 Worst Things To Ever Happen To Green Lantern

15 Films You Didn't Realise Were Based On Comic Books