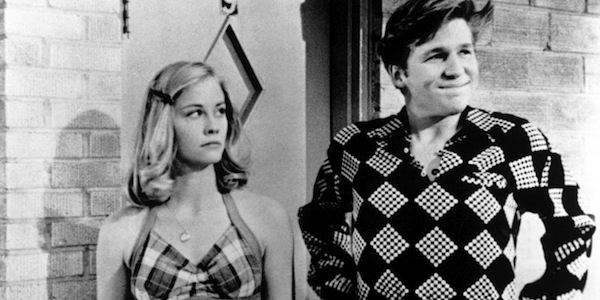 With the introduction of color films in the late 1930's, the signature classic black & white look became obsolete by the late 1960's. Enter: Peter Bogdonavich's The Last Picture Show. There's no better way to make a self-important film than by stripping it of a varied visual palette. Film's like The Elephant Man, Schindler's List, and Good Night, and Good Luck followed the same formula to drive away popular audiences and receive praise from critics and movie snobs alike. But 1970's The Last Picture Show has another thing going for its pompous reel. It's a film about the death of independent, small-town theatres. Taking place in early 1950's rural Texas, Bogdanovich's coming-of-age story is really just a snail-paced tsk-tsk at Hollywood's burgeoning desire to make money. Even Bogdanovich was bored by the prospect of reading the book upon which the film is based. It's obvious Bogdanovich yearns for innocence lost, like any adult worth their weight in angst. The film is about a teenage boy (Timothy Bottoms) who sparks a doomed affair with the lonely, haggard, middle-aged housewife (Cloris Leachman) of his high school football coach. Yeah. Okay. We get it. The new generation is clashing with the old and loses interest quickly. That's the nature of propagation, Bogdanovich. Total Film called The Last Picture Show "stunning" upon its re-release. The kind of stun that knocks you unconscious, right?
Contributor
Ian Tilman Nichols
Contributor
Twitter

Ian Tilman Nichols is a film reviewer and enthusiast based out of Saint Paul, Minnesota, USA. You can hear more of his thoughts on films by checking out the It's Only a Podcast and Flicksation podcasts.

The INSANE Venom Movie That Nearly Got Made

10 Actors Who Make Everything They're In Better