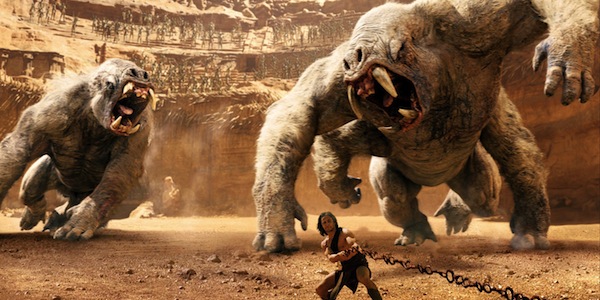 Theres no way around it. John Carter was a critical and commercial failureat least in the States, which is the only place that matters. The movie was condemned as a colossal flop before it even had a chance to perform. Common criticisms were its perceived similarity to other science fiction franchises, its lack of leading names in the cast, and its dense storyline.

Before its release, its reshoots and budget were regarded as delicious harbingers of failure. Upon the films release, major critics led the way with their expertise, and most online entertainment venues jumped onto the anti-John Carter bandwagon. It became the movie to ridicule in 2012, despite the fact that to this day, if you ask casual moviegoers their opinions of the film (those who actually saw it anyway), many of those opinions are more positive than negative.

Regardless of whether or not you enjoyed the John Carter movie, I think most of us can agree that on paper, it had a lot going for it. John Carter came out at a perfect time. Science fiction and fantasy are now actually in the mainstream, with many normal people being invested in superheroes, wizards, and aliens, whether they know it or not - I for one have a dear nonfan friend who was shocked to learn that the TV show Arrow is based on a comic book. While not perfect, John Carters characters are for the most part pretty entertaining with some great performances distributed throughout. The teams behind John Carter poured their hearts and souls into the movies rich world using the best resources Hollywood could muster. The John Carter books have a very peripheral but strong enough fanbase which should have been able to bring nonfans into theaters and quell comparisons to properties like Prince of Persia or Avatar. The expansive source material had great franchise potential. And Disney was, uh... backing it. The fact is, whether or not it was the greatest movie since Casablanca, John Carter should have leapt into many of our hearts like the titular hero from the dead sea bottoms of Barsoom. But it didnt. Why? Im going to look at Marvel Studios to try and figure it out. After all, it has been immensely successful with its movies, now merrily expanding into Phase Two of its business venture. Because of Marvel Studioss unwavering efficiency and its ability to market to wide audiences, Marvel fans are what currently drive the science fiction and fantasy film economy. They bring their uninitiated friendswhether by word of mouth or by forceinto theater seats, and thus more than any other demographic, Marvel fans alert executives about new trends in blockbuster taste. And for the most part, fans of the source, Marvel Comics, support Marvel Studios both financially and emotionally. Contrary to what usually happens with comic book movies, Marvel or otherwise, Marvel Comics fans are generally pleased with the Marvel Studios-controlled adaptations of their favorite characters. And because theres nothing comparable on the table for fans who prefer DC Comics outside of Batman and Superman, DC fans dont really have a choice but to support the Marvel movies through their fundamental desires to support their inner nerd. Because of this financial foundation, Marvels public relations team has something to stand on, and through business networking and the omnipresent need for readers and viewers, the industry and various entertainment news venues reinforce the seemingly wonderful quality of the films. Nonfan normal counterparts, thinking that the movies are something to be respected, further perpetuate the cycle. Perhaps there is indeed something inherently Marvel at the heart of Marvel Studioss success, something present within Marvel comics, films, and other methods of delivery which helps make Marvel Studioss films a cut above the rest, and helps make other film franchises successful as well. Marvel fans cant be blinded by or biased toward anything, can they? The answer is no. Not at all. So without further delay, here are 10 reasons why Marvel Studios fans dont like a movie like John Carter.
Contributor
Ian Boucher
Contributor
Twitter

10 Actors Who Hate Their Own Movie Performances

10 Movies You Weren't Supposed To Understand

10 MORE Actors Who Played Multiple Roles In The MCU New