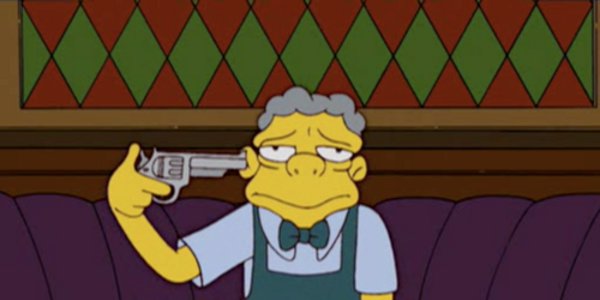 20th Century FoxThe violent, often-creepy propieter of Moes Tavern was driven to be the sorry figure who continuously pours the clientèle he hates tall jars of Duff all day by the extremely depressing life he has led. At some point during his childhood, Mr and Mrs Szylak dropped their son off at summer camp but never returned. Moe tells the deeply moving story of how Camp See-a-Tree was the closest he had to a real home. Moe may be all too quick to aim his trusty shotgun at irritating customers but so much in his life has gone wrong that its hard to blame him for his vicious temper. Moes inability to find love is one of his biggest failings. We have seen him come close to breaking out of the shackles of singlehood with flings with Renee (Dumbbell Indemnity), Colette (Flaming Moes) and even the aforementioned Edna Krabappel (The Seemingly Never-Ending Story) though on each occasion one of his many character flaws have ruined things. Moe is also infatuated with Marge, those these feelings are completely unreciprocated. His inability to find love may also be attributed to his tremendously ugly appearance (is poor old Moe really that ugly?!) which we are told is a side-effect of his boxing career which saw him get knocked out forty times in a row. It is perhaps because of his horrible way with women that Moe has attempted suicide on numerous occasions, supposedly making an annual Christmas tradition of attempting to end his own life. The deeply depressed bartender has called the suicide hotline so frequently that they blocked his number. If any man was ever destined to work it hospitality it most certainly wasnt Moe Szylak; the character with easily the most depressing backstory in all of Springfield.
We need more writers about The Simpsons! Get started below...
Contributor
Sam Heard
Contributor
Twitter
Facebook

10 TV Shows That Went One Season Too Long

How I Met Your Mother Quiz: Bet You Can't Name All These Characters!

The Office Quiz: You'll NEVER 100% This FILL IN THE GAPS Michael Scott Quiz

Supernatural Quiz: How Well Do You Remember The Very First Episode?

Teen Wolf Quiz: Bet You Can't Name All These Characters!

The Flash: You'll Never Get 100% On This Caitlin Snow Quiz!

Brooklyn Nine-Nine: The Toughest Rosa Diaz Quiz On The Internet!