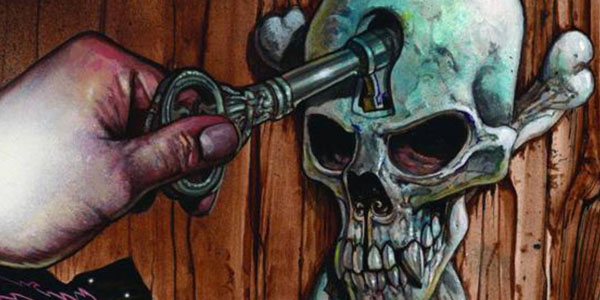 This week saw the release of the last issue of Locke & Key. With its completion the series stands as one of the greatest works of modern horror in any medium. It begins with the brutal murder of the Locke family's father and then moves the survivors of the attack back to their ancestral home, Keyhouse, in Lovecraft, Massachusetts. It may sound a bit hokey and contrived, but the reality is far different. After that shaky little pitch, the comic book series becomes a spellbinding reading experience, demanding page turns as the family comes to terms with its haunted past. The Keyhouse has magical keys that allow their users powers. These keys start revealing themselves to the Locke kids, who use the keys not only for their special powers, but in various attempts to deal with their trauma and to aid them in the struggles of adolescence and fitting in, as a malevolent force bent on unleashing demons long buried hounds them. That concept allows for some incredibly gripping moments throughout the series, which make the series' farewell a bittersweet experience. Now that it's over, and in case you weren't swept up in the earlier hype, we're looking back at the reasons why you should catch up and unlock the pleasures of reading this tour de force by Joe Hill and Gabriel Rodriguez.
Contributor
Carl Javier
Contributor
Twitter
Facebook

Carl Javier hasn't written a bio just yet, but if they had... it would appear here.

10 Comics Changed Due To Fan Backlash

10 Times Batman Got It Wrong

10 Comic Book Heroes Taken Down In Just One Hit!

You'll Never Be Able To Name All Of These Batman Villains!

8 Confessions Of A Marvel Fan After Reading DC Comics

Can You Guess The Superhero From Their Catchphrase?