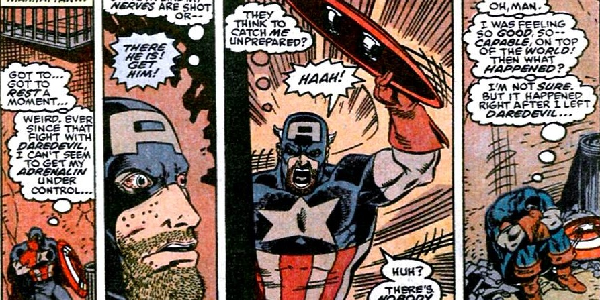 Marvel ComicsOne of the few things that Breaking Bad was criticised for during it's award-winning run on TV was that it rarely, if ever, addressed the true horror of crystal meth, which decimates people and communities alike across the world. They also never properly dealt with the way that Walter White's blue crystal would affect superheroes; in fact, we've never seen that tackled anywhere else. Thankfully, though, there was one character who would stand up and show us just how awful taking meth was if you were a metahuman. Yes, we're talking about the time Captain America became a methhead. It al starts when Fabian, Cap's tech support guy, starts tweaking to keep up with the massive workload that comes part and parcel with being on the Avengers' payroll. Steve soon gets his friend shipped off to rehab, and in the meantime decides to go sort out the dealers who were selling Fabian the product personally. Their lab explodes, as meth labs often do, and Cap unwittingly gets totally high off of the fumes. Although it takes him a little while to figure out exactly why he feels so awesome, Steve begins stalking the streets of Washington for more meth so that he can continue flying high as a kite. He even grows a five o'clock shadow, which is when you know something's wrong. A true American is always clean-shaven, dammit! Following a hallucination where he thinks he's being given the super soldier serum again, only this time in a dingy alleyway, Cap awakens in Hank Pym's lab, being told he's hit rock bottom. Which is kinda rich, coming from Hank. It turned out that the reason he was feeling so great and getting so immediately addicted was the way the meth reacted to the serum in his body, which meant Hank had to do a full blood transfusion to remove both the dependency and his superpowers. So it was all a ploy so that Cap could not have crazy abilities any more. Which obviously got retconned soon after, and his wonderful adventures in crystal blue persuasion along with it.

The Umbrella Academy Season 2: 10 Shocking Comic Moments That Must Happen

10 Most OVERRATED Comics Of All Time

10 Manga You MUST Read