So where are we now? Before Watchmen has provided a delightful Minutemen. A playful, fun filled Silk Spectre, a promising Comedian, a fantastic Nite-Owl, a solid Ozymandias and last week a dark, brooding Rorschach. This week sees the last of the Before Watchmen prequels. J. Michael Straczynski takes his second bite of the Before Watchmen apple and delivers Dr. Manhattan #1. Not only that, he could very well have delivered the best comic of 2012. I adore Watchmen. Every re-read re-establishes it's perfection. Every beat of it works. Every character is realised thoroughly for the good of the story. Hollywood have changed things, thinking it was for the better but they missed the point that Watchmen works as a whole and every part is important. That is the beauty of Watchmen and that is why it deserves it's place at the top of the comic book pile. I've said it before but Before Watchmen is one of, if not THE ballsiest moves pulled by DC Comics in its history. 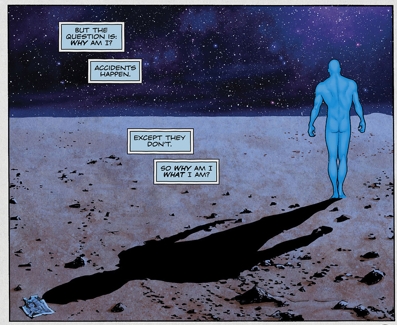 Giving each character their own space is working. There's no real sense of event or ground breaking story so far but spending time with these characters in stories that largely expand on what we already know has actually worked. Against the odds Before Watchmen has delivered a fine mix of nostalgia, depth and a collection of artists and writers laying their own stamp on the beloved Watchmen. Now personally, my knee jerk reaction to the question, "Who is you favourite character in Watchmen?" is Rorschach. Rorschach is of course a fan favourite when it comes to Watchmen. Who can't love the Hurm-ing and the ultimate sense of right and wrong he holds? Rorschach is awesome. However, you ask me my favourite thing about Watchmen and the answer is always Dr. Manhattan. Specifically his chapter on Mars where we discover his concept of time (still probably the best single comic book ever) but generally everything about him and his involvement in Watchmen is what felt so unique to our perspective of super human power.

J. Michael Straczynski immediately gets it. He gets the blue guy perfectly. The depth. The air of sadness. The way he talks. The way he sees things. Straczynski's Dr Manhattan #1 couldn't feel more perfect if he tried. From the moment that you realise the writing here is going to tackle Dr Manhattan's sense of time you feel a sense of bravery from Straczynski. Adam Hughes work is by far the best there is in the Before Watchmen run so far (honestly it's beautiful in every way) but it's Straczynski's bold strides through what is essentially the best of Watchmen here that shows just how good a writer he is. He adds things, repeats things, plays with elements, expands on stuff, damn near improves on things (that might be a little far but he's close) and Dr Manhattan #1 elevates Before Watchmen to some place exciting. It's almost as if he's pulling together the other titles in the run at points. The Hollis scenes where he talks about his retirement plans almost make Minutemen feel more compelling, Silk Spectre's involvement is brief but there's a sense it will come more into play later and knowing Manhattan could cross over with other characters later in this four issue run becomes exciting. However it's when Straczynski shifts his focus from time to the nature of infinite possibilities or more specially "What's inside the box", connecting his route to the Dr Manhattan origins, the buzz out of this issue could almost break a reader down on a molecular level.

I won't ruin the spin here and I'll hold off discussing the specifics until next issue but what Straczynski does here is essentially make this volume of Before Watchmen feel like it's important. For the first time in the entire run, Before Watchmen feels like it might just end up earning its place on the shelf next to the original Watchmen, rather than just being put there for collections sake. The structure, artwork, the attention to storytelling and the expansion of the elements of Watchmen are all handled in staggering ways. Straczynski doesn't exactly make Dr Manhattan his own (and probably never will) but he reminds us why we love the character so much and totally owns the story he wants to tell with the character. Dr Manhattan #1 has floored me and now waiting for the rest of this miniseries is going to be hell. If Straczynski keeps this up for the entire run we are really in for something extremely special.

"Straczynski already had my backing for the best series in Before Watchmen with Nite-Owl. Now he's topped that with Dr. Manhattan. Suddenly Before Watchmen feels like it could deliver more than simple expansion. It feels like it could deliver truly great stories. This one issue has elevated the whole thing for me. I just hope this is part of DC's plan and all of the #3s, starting next week have got something as special as this in store or the wait to Dr. Manhattan #2 is going to be painful.

10 Inappropriate Things Marvel And DC Want You To Forget

Marcus has recently released his first Game on the App Store. Check out Turtle E here http://www.facebook.com/TurtleEGame and @KeySecretStudio #TurtleEgame for more.

10 More Best Things The MCU Did Differently To The Comics

10 Supervillains Who Thought They Were The Hero

10 Worst Things Batman Did To Villains