It's been nearly 3 months since the last issue but Mark Millar and John Romita Jr. are back for issue #6 in their final Kick Ass arc and, as if to make up for the wait, it's an extra-long 32 page comic. Kick Ass 3 #6 explores Hit-Girl's origin story when Big Daddy was training her to become the lethal killing machine she is now. Meanwhile, Kick Ass isn't doing much of anything and the Skull and Bones eat some food. The origin story is what you'd expect except for some pretty weird moments. As a training exercise, Big Daddy has Mindy lay on the tracks, leap up onto a train moving at 70 mph, duck beneath a tunnel and then leap off the train onto a bridge. Very superhero-y exercise, I suppose! But once she's made it past the tunnel, Mindy has to run in the opposite direction the train's moving in to make it to the bridge. She makes it but the train was moving at 70 mph meaning she had to have been moving faster than 70 mph to reach the bridge  except Mindy doesn't have superpowers! So... how did she make it exactly? Mindy (who's recounting all this to the prison psychiatrist who for some reason is Walter White from Breaking Bad - he looks like him and his name is Dr White. I guess Millar/Romita Jr are fans and this is their homage!) reveals she had trouble killing to start with and Big Daddy had to trick her into pulling the trigger the first time, after which killing became easier for her. It was funny to see Millar/Romita Jr taking digs at Marvel by having sexual predators wearing masks that looked a lot like the Green Goblin, Doctor Doom and Loki even if Mindy seems to read Millarworld comics exclusively (copies of Jupiter's Legacy and Supercrooks are strewn around her on a stakeout)! It's an origin story that feels very unimaginative by Millar's standards but also asks the question: did it need to be told? I don't think it did. We already have a good understanding of Mindy at this point. An origin feels redundant especially when it doesn't add anything to the character. Big Daddy made her do crazy stuff which we've seen before and could easily guess that this was how it started. So what was the point? It just feels like filler. While Mindy spends the entire issue sat in a chair, the other characters are equally static. Dave/Kick Ass makes what amounts to a cameo appearance in his own comic where he writes a note to his girlfriend and picks up his trademark nunchucks; the Skull and Bones sit around eating takeout, and Uncle Rocco, the Big Bad of the series who's had little to do for six issues, convenes a meeting. Chris Genovese looks about to do something big and then the issue ends. 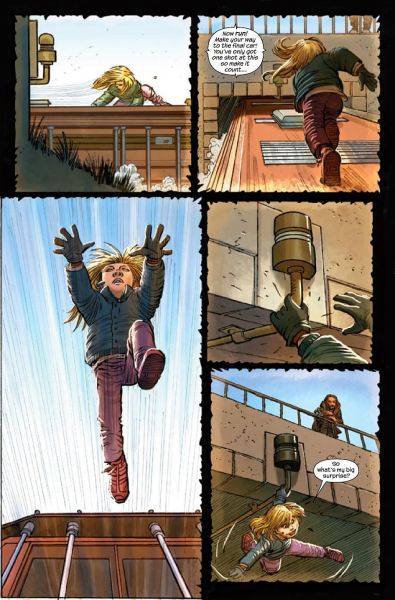 It's hard to believe Kick Ass is closing with this very weak story. There are only 2 issues left but it doesn't feel like it's building to anything because there's been so little to this series so far. I wish the final Kick Ass arc was more exciting than this and I'm not confident that Millar can recapture the momentum that the series started with so late in the game. Kick Ass 3 #6 continues the final series' downward slide in quality and makes me wish that the title had ended with the last book rather than go out so poorly like this. Published by Icon, Kick Ass 3 #6 by Mark Millar and John Romita Jr. is out now
We need more writers about Kick-Ass and Reviews! Get started below...
Contributor
Noel Thorne
Contributor
Twitter