Be they mildly controversial or just plainly disgusting, video games have developed somewhat of a reputation for their typically violent nature. More often than not, games don't have to include anything other than guns and blood before certain critics start to condemn them for promoting crime. Needless to say, a few games go that extra mile, incorporating disturbing scenes or activities that, on occasion, even have hardcore gamers questioning what it is they're playing... This list compiles a number of disturbing scenes that got critics and players alike talking in positive and negative ways. I guess there's no such thing as bad publicity, right? 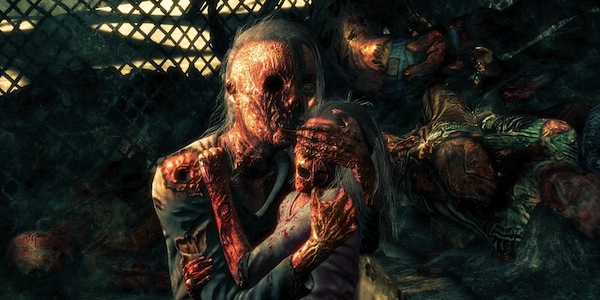 Although Spec Ops: The Line did not receive the mass publicity that more "mainstream" games (such as Call of Duty or Grand Theft Auto) are accustomed to, those that played the game were bound to remember it due to its now infamous "White Phosphorous" scene. The game placed you in a three-man squad of Delta Force soldiers who had arrived in a ruined, sand-covered Dubai to report on the situation and help evacuate the civilians. They soon find that the marine battalion that had been sent before them had gone rogue and their mission quickly becomes a desperate fight for survival against once-friendly troops. With American troops fighting American troops, the game was perceived to be "anti-war" by some, although others felt it was simply addressing the psychological consequences of war. Regardless, it is most noted for the scene in which the Delta Force squad comes across some white phosphorous weaponry. With endless swarms of enemies closing in, the player is forced to use the white phosphorous. For those who do not know,it literally burns its victims to death. As if having to walk through the aftermath of your actions wasn't enough, the squad then makes a discovery disturbing both to them and the player. Innocent civilians, the very people you were trying to save, were caught in the attack. In a depressing cut scene, one particularly powerful image is highlighted. A woman, clutching a child to her chest, is sat upright amidst the bodies. With her and the child both graphically burnt, showing scorched skin and facial features missing, the scene is almost certain to leave a foul taste in the player's mouth.
Contributor
Glen Harris
Contributor
Twitter
Facebook

I'm camera operator and editor at a regional TV station just looking to express my interests/opinions of TV, films and games. Always open to feedback and suggestions!

10 Video Game Twists In Front Of You The Whole Time

10 Video Games Better Than The Movie They're Based On

8 More Incredible Gaming Characters Who Only Appeared In ONE Game

10 Upcoming PS5 & Xbox Games That Will BLOW YOU AWAY