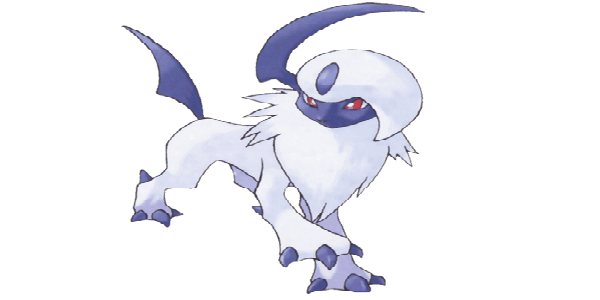 Absol is the Pokémon that has always struck me the most for some reason. Be it the face, the general colour scheme or the way that it conveys darkness so very well  I was terrified from the first moment that I saw it, and have remained terrified up to present day. The first stirrings of fear started at its head. Absol has an excellently designed head, one that seems deliberately made to be creepy. On first sight it looks like a skull, with dark shadows for eyes and a certain creepy impression that can only really be conveyed by bone. At a closer look it only gets creepier  the design of Absols head was apparently modelled on the yin-yang symbol, but in a way so eerie that it is hard to get away from. It is a design that still sends chills down my spine, even now. But, then, perhaps its general colour scheme contributes to that. Absol is designed almost completely in black and white, with only a little glint of red to add some flavouring. As such it very much gives off an impression of the other, something out of the ordinary. The subdued tones of its design make it seem like something not of this world, and that is certainly a striking impression to convey. It is yet another thing that I will always feel slightly unsettled by, even at the briefest glance. All of this adds to my final reason why Im just so scared by it, which is that is conveys an impression of darkness so very well. Absol is a pure-dark type, and looks like it could be nothing other than that. It looks like it should be lurking in the night, terrifying the children. It looks like a sentinel of sorrow, something that appears to look sadly over tragedies. It is the most mournfully sinister Pokémon that Ive ever seen, and that is something to admire even as I shudder at it. I never used to be able to put my finger on why I found Absol just so creepy  but now, with the benefit of hindsight, I understand exactly why. Absol is designed to be creepy, and fits the brief perfectly. From the head to the colouring to the general impression conveyed, Absol is a Pokémon of darkness and fear and things that go bump in the night. It is, and will probably remain, the Pokémon that has always terrified me the most  and its excellent design is the main reason why.
TV

HBO's The Last Of Us - 5 PERFECT Actors For Joel & Ellie

A Classical Studies and English Literature university student. Interested in most things ancient, Shakespeare and Doctor Who (Mainly Doctor Who, I will admit). Apparently now a vaguely official writer-type person, which is something that may never stop being a shock.

8 Remasters That Made Video Games WORSE